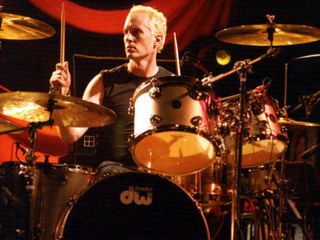 Freese has a package that's right for you

Josh Freese will join your band for $75,000. Or for the same price, he'll be your personal assistant.

Not that flush? No worries. The acclaimed drummer, known for his work with Nine Inch Nails, A Perfect Circle and Devo, among others, has other ways to make you happy.

For $20,000 Freese will give you a signed drum set. Not only that, but Maynard from Tool, Mark from Devo and Freese will take you miniature golfing. Throw in a drum lesson or a back massage and you're laughing.

Got $10,000? For that much, Freese will take you and a guest to Disneyland, and at the end of the day you can drive off with his Volvo station wagon. Sweet.

11 configurations to hold you

All of these offers and more are tied into the release of Since 1972, Josh Freese's new solo album, available as a physical release 14 April and a digital pre-release at joshfreese.com beginning 24 March.

While we haven't yet heard the music, one thing's for sure: the marketing is brilliant. Each of the 11 configurations features unique extras, all highly creative and, in many cases, hilarious.

Consider the $5,000 package: Freese will write a song about you and make it available on iTunes. He'll get drunk with you too!

Can't afford five large? For only $2,500 Freese will give you a private drum lesson and a signed snare. In addition, you can pick three items from his closet, you get to change diapers with him and afterwards the two of you can hit a strip club. (This is what we call the Value Meal.)

If you're really strapped, the $250 plan will nab you a T-shirt, a signed snare drum and lunch with Freese at PF Changs or The Cheesecake Factory. (Both joints kick butt.)

Of course, if you're flat-out busted, you can go the $7 route which gets you a copy of Since 1972 and three videos. (Still not bad. These days, seven bucks pretty much equals a sandwich.)

As for us, we're going for the gusto. That's right, 75 grand and Freese is rockin' in our band. Say...we can expense that, right?