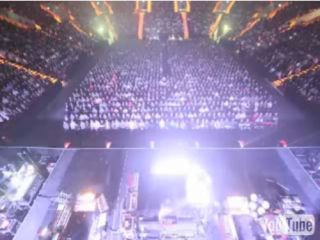 Watch the abridged Jarre gig below.

We all like to get value for money when we go and watch a gig, but let's face it: sometimes they can go on just a little too long.

If you want to get the complete Jean Michel Jarre concert experience (sort of) in just under two minutes, though, there's a solution: a time-lapse video of his recent show in Malmo.

In fact, it's not just the gig you can watch - you'll also see the crowd filing in, leaving at the end and the stage being broken down.

The only downside is that there's no sound, though if you think that Jarre is the type of musician who should be seen and not heard, that won't bother you too much. Fans of the man, though, can check out his website for future show and ticket information.