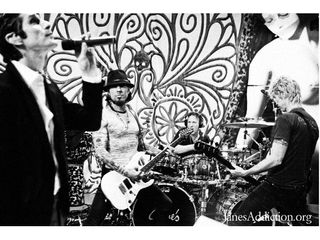 Jane's Addiction played their first concert with Duff McKagan as their new bassist at singer Perry Farrell's birthday bash the other night in Los Angeles.

The event, held at the club Les Deux, officially put to rest one of the worst-kept secrets in the rock world, namely, is McKagan, ex-bassist for Guns N' Roses and sorta-still member of Velvet Revolver, joining Jane's Addiction for good?

Before the birthday gig (check out the video below of the group blasting through Whole Lotta Love), guitarist Dave Navarro posted a a photo on his Twitter account showing McKagan in the studio with the band. The addition of McKagan comes in the wake of original bassist Eric Avery's announcement that he was leaving the group (he had reunited with Jane's following a 17-year break from the band).

What all of this means for the future of Velvet Revolver is anybody's guess. Jane's Addiction are said to be working on an album that will be released in the fall of this year, with an extensive world tour to follow. (Last night, MusicRadar received a press release from Jane's PR firm, welcoming McKagan to the band - meaning, he's not doing this as a lark; he's a full-time member.) And as we all know, Duff's VR bandmate Slash is about to release his much-ballyhooed solo album, with his own world tour to follow.

Although Slash has indicated that the search for a singer to replace Scott Weiland in Velvet Revolver is still ongoing, these recent developments don't exactly bode well for the troubled outfit.