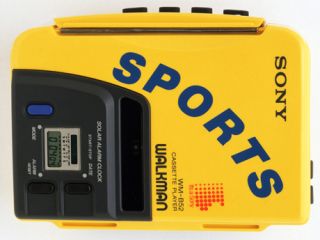 It was 30 years ago this week that Sony unleashed its iconic portable audio cassette player onto the world, forever changing our music listening habits in the process.

Join us as we pay homage to the Walkman with a quick trip down memory lane: from the very first model to the rise in cassette culture we're witnessing today. Plus all the '80s hair, home taping campaigns and (not very) portable storage devices in between.

The original cassette-based Walkman went on sale on 1 July, 1979. The Japanese were the first to get one, a truth which hasn't really changed since.

It's good (not) to talk © Bettmann/CORBIS

The UK version came with a twin headphone jack (for dual listening) and a 'Hotline' button which 'partially overrides the sound from the cassette' (for conversing while dual listening). Unfortunately, both features were ditched for the follow-up Walkman II.

The Walkman is synonymous with '80s and even early '90s fashion. Just like the shell suit. Those pink dumbbells are a disaster, however.

Phillips actually invented the Compact Cassette in 1963! Although it was Sony that applied the pressure on Phillips to license its format for free, forcing it into the mainstream. Check out Tapedeck.org for a showcase of cassette designs through the ages.

This was the British Phonographic Industry's (BPI) slogan for its anti-copyright campaign of the 1980s. The BPI feared that the rise of recordable tape devices - stealing from the radio and the labour of love that was the mixtape - would affect record sales. The campaign's been parodied ever since.

…the cause probably wasn't helped by the introduction of the Walkman Pro and its super high quality record feature in 1984.

Perhaps surprisingly, 1984 also saw the first incarnation of the Sony Discman (the D-50). Discman owners will no-doubt remember the ESP (Electronic Skip Protection) feature (introduced later) - a saving grace for the product which had a tendancy to skip at the drop of hat (or an American flag bandana). Unlike the cassette-based Walkman which you could hurl against a wall and it wouldn't miss a beat. Maybe.

Time to get the pencil out and rewind © Lawrence Manning/Corbis

Although, this did used to happen quite a lot. Often for no apparent reason.

"The holy grail" of Walkmans. This baby came with a double motor drive system (one for each side - for accurate playback) powered by a single AA battery. A well-kept model can still fetch a decent price on eBay and the like, thanks in part to the recent rise of Cassette Culture…

While Kanye West embodies the (much-maligned) Auto-Tuned sounds of today, he'll also be first to tell you all about ace new Domino signing Dirty Projectors who (not coincidentality) just released their Bitte Orca album on a limited edition cassette (with a digital download code for those not cool enough to own a tape deck, of course).

This man definitely has the boxset on pre-order... © Philip Gould/CORBIS

Beck is another cassette convert: he's covered Sonic Youth's EVOL album in its entirety, on cassette, for an upcoming boxset. Nowadays merch tables at gigs are groaning with cassettes. Underground noise and not-so-noisy bands such as Emeralds are shunning the seven-inch and even underground mainstay the CD-R, instead prefering to flog ultra-limited runs of C-20s.

Other incarnations of the Walkman have included the Video Walkman (it played Video-8 tapes), MiniDisc Walkman, Network Walkman and the Walkman MP3 and current efforts: the Walkman Video MP3 and the Walkman Phones under the Sony Ericsson brand. None of which have taken off in quite the same style as the original.

Despite the fact that your average MP3 player is now the size of an earbud, Sony continues to make (and sell) cassette-based Walkmans to this day. This one (the WM-FX290) will set you back £31.99 on Amazon. Or £36.44 when purchased with a pack of 12 Duracell AA batteries… that's a lot of listening power.

And something which this kid - who said "it took me three days to figure out that there was another side to the tape" when he swapped his iPod for a Walkman earlier this week - is probably very secretly impressed with.