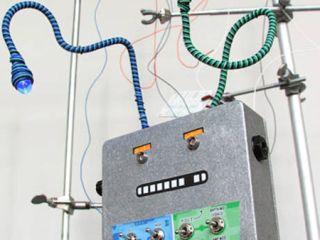 You won't find this synth in your local music shop.

You might think that knobs, faders and possibly a keyboard are prerequisite for a synthesizer. However, there are some models that don't just defy convention - they blow a big squelchy raspberry in its face.

These are the instruments that don't look, sound or play like any model you'll find at music hardware retailers; they're the synths that are, quite frankly, nuts.

If you thought that guitar and drum builders had twisted minds, just wait until you get a load of this lot - and be warned that the last page has a Not Safe For Work rating.

Credit should go not just to the creators of these beauties, but also to the many other sites that brought them to our attention. In particularly, Synthtopia proved to be a great source of quirky synthesized madness.

Looking like some sort of 21st century executive toy, this is a pattern-based drum machine with a difference. Percussive sounds are triggered not by clicking a mouse or pressing buttons, but by placing ball bearings in a grid. Developed by Peter Bennett as part of his PhD research, the BeatBearing is billed as a tangible rhythm sequencer, and looks like a strangely satisfying musical experience.

This is the point (possibly) at which music technology and high fashion intersect. There's no real magic here - the guts of a toy piano have simply been removed from their casing and attached to a T-shirt with poppers (click here for a guide to creating your own). Sounds are created by pressing fabric buttons. It's an interesting concept, but we'd be interested to see what it'd look like after going through a couple of fast spin cycles.

If you're going to be at a loose end this weekend, why not consider building yourself a "light-controlled analogue noise friend"? That, in a nutshell, is Bleeplaps' Thingamakit, which is available to buy in kit form. You can order it with or without the standard enclosure (for $70 and $60 respectively). If you go for the latter option, why not post a picture of your creation on the Thingamakit Flickr group?

Next page: the musical typewriter, the drinker's synth, a catty cacophony and the most fun you can have making music with your clothes on...

OK, we'll level with you - we don't know exactly what this thing is or how it works. The 'What's Chromatone' section of the product website left us more befuddled than it did enlightened, though we did surmise that this is a keyboard that's designed to be easier to learn and play than a standard piano, and there are some impressive video demos. We're just happy to call it the musical typewriter, though.

The sometimes torturous process of music making has driven better men than us to drink, but DamagedMeat has created tunes with lady liquor in a most literal manner. He used the sound of absinthe dripping into a glass to trigger parameter changes on his Doepfer A100 modular, and claims that he edited this video while "totally drunk".

Just to show that it's not just hardware synth builders who are slightly unhinged, here's a software instrument that simulates the sound of a cat. The good news is that you can download it for free - just make sure that there aren't any mouse synths in your plug-in folder or it'll scare them away.

Pretty much any synth can seem sexy if you're a studio-tanned electronics nerd, but for the rest us, they're usually objects of practicality rather than arousal. Rory Harnden's creation is a slightly different proposition, though: in his Body Music video, you can watch a synth being triggered by people touching each other. What could be more natural than that?

Next page: A steampunk monster, a different kind of mixer, a synth that goes like a train and a scientist's dream...

Steampunk instruments aren't exactly a rarity, but the sheer scale of this one sets it apart from the Victoriana crowd. The creator, a chap called Peter, documented the creation of this modular monster on his Flowerseven blog, and explained the lack of a keyboard to The Steampunk Workshop by saying: "I feel that the piano-keyboard paradigm forces you to approach the instrument with a mind set that is deeply rooted in western musical tradition and therefore has some baggage attached to it." That's the spirit.

Like most hardware synths, this one from Analooger is mains-powered and has buttons on it, but that's about as close to normal as it gets. In fact, this isn't really a synth at all - it's a mic'd-up '70s blender run through an Access Virus (for gating purposes). You play it by flicking between its speed settings. We're not sure how to describe its sound, but it tastes good.

For most of us, the golden age of steam came to an end several decades ago, but Lorin Edwin Parker from Electric Western is still living the dream. What started as a "joke about the absurdity of a steam-powered synthesizer" became a preposterous reality - be sure to have plenty of hexamine, ethanol or propane handy if you want to make music with this puppy.

This offering from pask present looks more like a science project than it does an instrument, but trust us: it can produce sounds (click here for the proof). These are generated via "an electrochemical reaction between Aluminium, Copper and Salt water (NaCl), fed through a preamp after basic filtering via a capacitor and resistor." Fire it up and stand well back.

Next page: Our NSFW number one…

We're firmly in NSFW territory here, but once you know that no one's going to be looking over your shoulder, give Matt Ganucheau's porn/music crossover instrument the once over. Her name should give you some indication as to what she's all about - those who touch her are invited to "discover how her true sexual potential is unlocked" via sensors, knobs and one single strategically-placed ribbon controller (yes, it's down there).