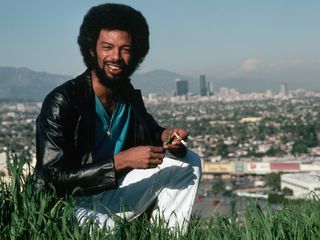 Gil Scott-Heron, the celebrated spoken-word artist, musician and author, passed away yesterday (27 May) at the age of 62 as a result of yet unknown causes. Often referred to as the 'Godfather Of Hip-Hop,' Scott-Heron died in New York City at St Luke's Hospital.

With his unique and groundbreaking mix of minimalist percussion and politically charged poetry, Scott-Heron was seen as a major influence and leader in the embryonic days of hip-hop. His most famous composition, 1970's The Revolution Will Not Be Televised (released on his debut album, Small Talk At 125th And Lenox, and its follow-up, Pieces Of A Man), has been sampled by hip-hop artists and often quoted by many.

As news of Scott-Heron's death shot through cyberspace, artists quickly paid tribute. Public Enemy's Chuck D wrote on his Twitter account, "RIP GSH..and we do what we do and how we do because of you. And to those that don't know tip your hat with a hand over your heart & recognize."

Apparently, the two mic masters have a collaboration in the can. "Quite stunned at the fact I just wrote and recorded guest vocals on one of his next albums," Chuck D added. "This makes one realize that time is precious, damn."

Slaughterhouse rapper Joell Ortiz also weighed in on Twitter to recount his memories of Gil Scott-Heron, writing, "Seen Gil Scott Heron at Joe's Pub when I was a kid. Prince was there." Producer Just Blaze was quite emotional when addressing the news on Twitter. "Terrible news to get while on stage. No one in my family died but gil scot was ... ah forget it. Gonna finish this show," wrote the noted beat maker.

"Wow. The rest of my night I'm gonna listen to Gil Scott-Heron," New York rapper Talib Kweli tweeted. "We love you brother. We will miss you. RIP."

Following decades of drug addiction and much-publicized legal problems, Scott-Heron released I'm New Here in 2010, his first album in 16 years. Critically praised, it signaled a powerful return to form for the multi-talented artist who leaves behind over 15 studio albums, 11 compilation discs and nine live recordings.