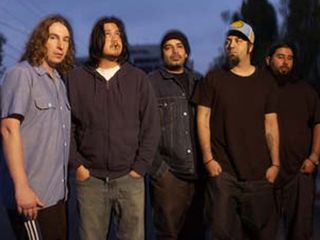 Deftones are recording without bassist Cheng (second from left)

The Sacramento, California-based band Deftones are once again in the studio, re-recording their already much-delayed new album Eros.

The album was considered finished last November when bassist Chi Cheng was involved in a serious car accident which put him in a coma.

Writing on their MySpace blog, Deftones state that "the songs recorded for Eros are very special to us as they are the latest with Chi (and we certainly hope not the last); they have history and significant meaning to us.

"However, as we neared completion on Eros, we realized that this record doesn't best encompass and represent who we are currently as people and as musicians.

"And although those songs will see the light of day at some point, we collectively made the decision that we needed to take a new approach, and with Chi's condition heavy on our minds while doing so."

Cheng, who was dischanged from the hospital last March, remains in what is described as a 'super coma' as a result of his medication.

Filling in for Cheng is former Quicksand bassist Sergio Vega. According to the band's publicist, Rick Gershon, Vega is working with Deftones, both live and in the studio, "but he is in no to be considered a member of a band. He's merely playing with the group until Chi is able to come back, healthy and strong - and God willing, he'll be able to do so soon."