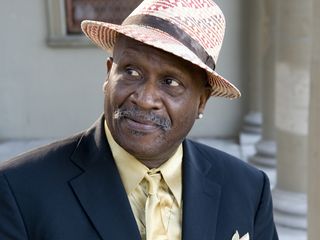 Taj Mahal will be returning to the UK next month for a one-off headline show at London's Southbank Centre and we're giving away a pair of tickets to one lucky blues fan.

The gig will take place at 8pm on 4 July in the Queen Elizabeth Hall of the Southbank Centre as part of their Africa Utopia festival and follows Taj's performance at Hop Farm a few days previous (1 July).

The guitarist and multi-instrumentalist recently celebrated his 70th birthday and is generally held to be one of the most influential blues players of the last 50 years. During his time he's played with The Rolling Stones, Eric Clapton, Ry Cooder, Levon Helm and Etta James, among many others.

This gig marks a rare opportunity to see the bluesman play a headline show in the UK.

If you want to be sure you don't miss it, you can still buy tickets to Taj Mahal's Southbank Centre show.

To be in with a chance of winning the tickets, just head to the competition entry page and answer the question below correctly.

What was Taj Mahal's birth name?

Click here to head to the competition page and enter!