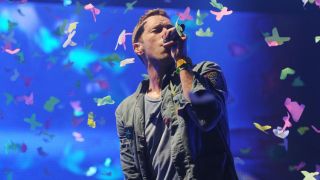 Chris Martin on stage at Glastonbury in 2011: he'll try to Fix You, but who's going to fix the mess being made by all that coloured ticker-tape? (Image credit: Rune Hellestad/Corbis)

Coldplay's 2011 headline set on the Pyramid Stage has been voted the top Glastonbury moment by BBC Radio listeners.

This saw off competition from Radiohead and Blur's performances in 2003 and 2009 respectively. Listeners were asked to pick a winner from a shortlist made of up favourite moments that were nominated by BBC Radio DJs.

And it seems that the corporation's jocks have relatively short memories; all of the moments came from the past decade, which meant that there were no places on the list for some of the classic Glastonbury performances from earlier eras.

Coldplay's career-spanning set featured songs from all five of their studio albums and closed with an ebullient performance of Every Teardrop is a Waterfall.

BBC Radio's Top 10 Glastonbury moments are below; you can also check out MusicRadar's 10 classic Glastonbury performances since 2002. UK users can enjoy full coverage of this year's festival on the BBC Glastonbury 2013 website.