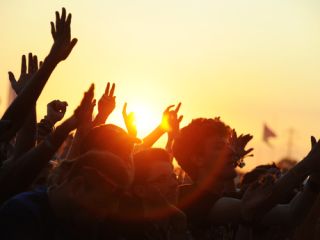 With Glastonbury Festival kicking-off properly today, we thought we'd bring you a countdown of 10 classic performances that the MusicRadar team have witnessed at Worthy Farm over the past decade. All with video, of course, so you can relive these great festival highlights with us.

Think we've missed anything or are way off the mark? What are your favourite festival performances from the last decade? Let us now via Facebook, Twitter or the comments section below. And if you're at Glastonbury this weekend keep us updated with what you're up to via the same means.

It feels like Arcade Fire should have played Glastonbury more times than they actually have - their multi-instrument, semi-choral brand of indie rock seems like the perfect fit for Eavis' fields.

Yet they've only actually appeared once, playing the Other Stage while touring their second album, Neon Bible, in 2007. The show was worth the wait though.

A high-profile Glastonbury set can really separate the wheat from the chaff when it comes to up-and-coming, hyped-up bands.

When The XX played in 2010 - performing sets on both the John Peel and Park stages over the weekend - they cemented their place as one of the most exciting new bands to emerge over recent years. Turning songs that were unknown to most just months before into emotional, crowd-bonding moments of brilliance.

After years of not-quite breaking through into the mainstream consciousness, Elbow's 2008 Mercury-winning album The Seldom Seen Kid finally saw the band reach the wider audience they deserved.

Their set on the Other Stage was timed perfectly with this gear shift. And the band playing One Day like This with an orchestral backing as the sun finally came out on a cloudy afternoon made for a perfect festival atmosphere.

Back in 2003, The Flaming Lips took to the Pyramid Stage directly before Radiohead's Saturday night headline set.

Despite being active since the mid-1980s, it was only at the turn of the millennium, with the release of '99's The Soft Bulletin and 2002's Yoshimi Battles The Pink Robots, that the Flaming Lips found commercial success. Their '03 set saw the Lips performing their brilliantly eccentric live show - complete with animal costume-clad dancers, confetti canons and giant inflatable suns - to a larger audience than ever before. And they didn't fail to deliver.

The White Stripes headlined the Pyramid Stage in 2005, stepping up to the plate and giving the sort of awe-inspiring headline performance you'd expect from the duo.

But their best Glastonbury performance came three years earlier, when the band performed the Pyramid Stage mid-afternoon. Touring their third album White Blood Cells at the time, the duo played a set that was, on the surface, much more low-key than their later headlining performance would be.

The stage set-up consisted of just Meg on drums and Jack on guitar and vocals. But the lack of stage props and extra instruments did nothing but draw attention to the raw, garage-rock power of the duo's music.

For years Glastonbury's Pyramid Stage has played host to 'veteran' artists on the Sunday afternoon (the likes of James Brown, Brian Wilson and Shirley Bassey have all played the slot).

But few of these classic artists can match the emotional singalongs inspired by dark crooner Leonard Cohen. His rendition of Hallelujah in 2008 - performed hunched over in front of a rapturous crowd - was a true Glasto classic.

Unfortunately, Cohen asked not to be filmed at the festival, so the footage above is the best we have.

When QOTSA played the Other Stage back in 2002 the band had just released their excellent third album Songs For The Deaf.

At the time they were touring with what is undoubtedly their 'definitive' line-up - including Nick Oliveri on bass and Dave Grohl on drums. Combine that with a great setlist of hard-edged Queens classics and you've got one of the most all-out rocking sets Pilton has ever seen.

Despite fairly insane weather conditions in 2004 (a vast number of tents were lost under floods), McCartney bringing the music of The Beatles to the festival for the frst time was enough to cheer anyone up.

Sure, his set verged on the cheesy side at times (firework displays during Live And Let Die, incessant thumbs-up signals to the crowd) but nobody can knock a huge crowd singalong to Hey Jude. As anyone who was there will testify, nothing brings a huge crowd of strangers together more than witnessing Beatles classics performed by a true legend.

While Radiohead's '97 headline set - shortly after the release of OK Computer - is often seen as their 'definitive' performance, their set in 2003 shouldn't be overlooked for classic status.

While the band famously said that they didn't enjoy performing in '97, due to sound problems on stage, when they returned six years later they were obviously in their element. The set mixed their more leftfield material from Kid A and the recently released Hail To The Thief with classic rock numbers from The Bends and OK Computer.

If '97 marked their entry into the big leagues, '03 cemented Radiohead as one of the biggest, most exciting bands in the world.

Of all the acts on this list, none had something to prove as much as Jay-Z did. His booking, as the first rap artist to headline the Pyramid Stage, was much discussed in the press in the lead up to the festival. He was blamed (probably inaccurately) for slower-than-usual ticket sales and derided publicly by Noel Gallagher.

But Jigga stepped up to the plate, coming onstage wielding a guitar and playing a rough, tough-in-cheek cover of Oasis' Wonderwall before cutting into his own hit 99 Problems. It's a set that proved not only that hip-hop had a place on Worthy Farm, but that Jay-Z is one of the most consummate pop performers on the planet.