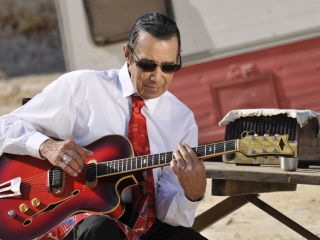 After getting his start as a young teen in 1944, Galbán became a member of Los Zafiros in 1963, adding his acclaimed American-influenced style to the world-renowned vocal group that combined traditional Latin music with bolero, doo-wop, calypso music, bossa nova and rock (see the video above). This fusion transformed Los Zafiros into one of the most popular Cuban groups of the time. They even performed in front of The Beatles at a show in Paris.

Following his tenure in Los Zafiros, Galbán formed Batey, which brought Cuban music to even bigger audiences. The guitarist's profile soared on an international scale when Ry Cooder asked him to participate in Wim Wenders' Academy Award-nominated film, Buena Vista Social Club. Galbán and Cooder would later team up for a disc called Mambo Sinuendo, which won a Grammy for Best Pop Instrumental Album in 2003.

For the past decade, Galbán toured as a guitarist for the Buena Vista Social Club ensemble. At the time of his death, he has working on a solo album, titled BlueChaCha.

"It is a very sad day for Cuban music and for fans of Cuban music," said Buena Vista Social Club manager Daniel Florestano. "Galbán's enormous impact worldwide, with his unique guitar sound and warm smile, will be missed by many."