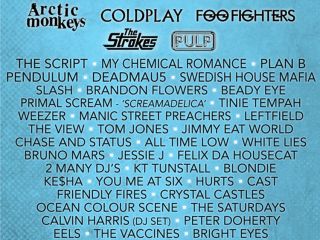 Some of the confirmed acts so far...

Scotland's music festival powerhouse T In The Park always seems to be a bottomless pit of cash/persuasion when it comes to securing the big headliners, and this year's sold out event is no exception.

Even without Blink-182 (who cancelled all UK appearances to work on their new album), T's 2011 line-up boasts Arctic Monkeys, Coldplay, Foo Fighters, The Strokes, Pulp, and the just confirmed Beyonce.

That's two of Glastonbury's headliners, one of V's, and one of Reading and Leeds', all in the same place.

Even Slash is making an appearance. Impressive.

T In The Park 2011 takes place between 8-10 July in Balado, Scotland. As mentioned, it's completely sold out, but you can look enviously at the full lineup/plan your TV viewing schedule on T's official site. Or check out MusicRadar's huge summer festival guide 2011 for more - many less-mainstream - options.