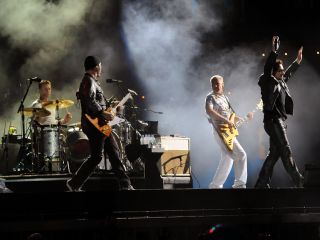 It's official: U2 are headlining Glastonbury 2011. The Edge broke the news during a video announcement at last night's NME Awards ceremony, shortly after the Somerset shindig was named Best Festival.

U2 were forced to cancel last year's slot due to Bono's untimely back operation, leaving The Edge to satisfy fans by joining Muse on the Pyramid Stage for a rousing rendition of Where The Streets Have No Name.

"I have to say there is something really special and iconic about that stage," The Edge said yesterday. "So, we're all looking forward to coming back to pick up where I left off."

"U2 will be playing on June 24. And we're so excited to get to play in front of the world's greatest festival audience. We'll see you there!"

U2 will join Coldplay and Beyonce to become the third and final 2011 headliner.