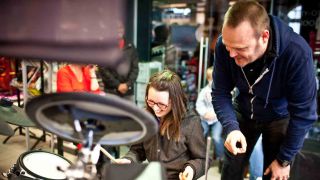 National Learn To Play Day is returning in 2014, with more free tuition, tips and treats on offer for budding drummers.

The third national Learn To Play Day is organised by Music for All, the charity of the UK musical instrument industry and will take place on April 12th 2014 offering more than 10,000 FREE instrument 'taster' lessons to ALL.

Over 100 musical instrument shops and other venues, throughout the UK, will open their doors offering anyone who would like to try their hand at making music, the chance of a FREE musical instrument lesson. Comedian, drummer and all-round good guy All Murray (pictured above) is among those giving the day his full backing, as he joins with the cast of award-winning musical Once to offer free music lessons at Yamaha Music London.

DrumWright is one retailer to announce details of a host of taster sessions and lessons. Among these is a masterclass on jazz playing and brushes with veteran sticksman Bobby Orr.

Chris Wright, Chairman of DrumWright, says: "'Bobby is widely regarded as Britain's greatest living drummer. He has played with such greats as Sammy Davis Junior and Bing Crosby, and did three tours with the legendary Benny Goodman orchestra. He also played on hundreds of hit singles including Helen Shapiro's 'Walking Back to Happiness' and Donovan's 'Sunshine Superman.'"

Full details of the event, including participating shops, and local appearances can be found at www.learntoplayday.com.