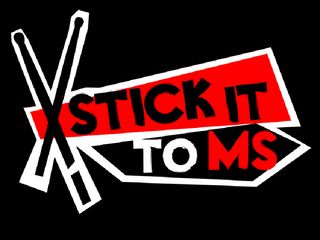 After breaking the record the largest full drum kit ensemble back in 2009, Stick It To MS returns this year to attempt to raise even more money for The Multiple Sclerosis Society and break the record again.

The event, supported by Natal Drums, will take place in Manchester in July and aims to gather 800 drummers together, all playing to the same beat. Check the press release below for full details.

PRESS RELEASE: 'Stick it to MS' is an event that will see hundreds of drummers attempting to break the Guinness World Record for the largest full drum kit ensemble. This involves drummers on full drum kits playing a set drum beat in time with each other for five minutes.

The event also received a huge amount of mainstream Television and Newspaper coverage. SITMS 2012 will attempt to break its own current world record with a target of over 800 drummers!

Once again, the brainchild of event organisers Rick and Karen Prince, Stick it to MS is back on Sunday 15th of July 2012 and will be held at EventCity in Manchester. The event, sponsored by Natal Drums (Marshall Amplification), will feature a whole host of celebrities together with drummers from Natal's artist roster.

Jim Marshall OBE is honoured to once again be part of this fantastic event, the biggest of its kind in the world. Jim is a life-long drummer and committed fund raiser having raised millions for numerous charities over the past fifty years.

We will releasing more details of our celebrity and artist roster over the coming weeks.

Information taken from official press release, for more visit Stick It To MS.