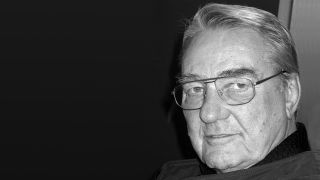 Paiste Cymbals has announced the death of Robert Paiste, ex-head and grandson of the company's founder Michail Toomas.

Robert joined the business working alongside his father in the 1940s, before moving the Paiste HQ to Switzerland in 1957 and later assuming joint control of the company with brother Toomas.

The official statement, available in full on the Paiste website, reads "It is with deep sorrow that we announce the passing of Robert Paiste, family member, visionary cymbal maker and perennial company principal.

"In the four generations of family members to guide the company, Robert was a foremost presence. His contribution was of immense importance, and he shaped Paiste in major ways.

"Robert's life-long focus was the development and production of cymbals and gongs. As an uncompromising perfectionist, he established the benchmarks for quality, fidelity and consistency that are the hallmarks of Paiste today."