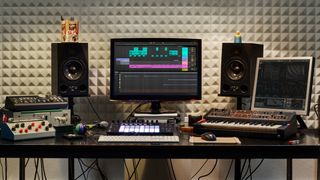 As the COVID-19 crisis unfolds, music software and gear companies have been quick to step up to the plate, offering a slew of freebies to maintain the morale and productivity of confined musicians and producers across the globe.

Here, we've rounded up all of the best giveaways, and we'll keep this hub updated. Grab 'em while you can.

Fender Play centres around easy-to-follow, instructor-guided videos to help new musicians get underway and to develop players who are a little further along on their journey. You can track your progress as you move through the lessons, too.

Learning songs is a fundamental part of musical development and, in addition to the lessons, the Fender Play library is rammed with jam tracks by everyone from Led Zeppelin, Green Day and Oasis, to Sia and Shawn Mendes.

How to get 3 months of Fender Play for free
Visit fender.com/playthrough to redeem your code. Once you have redeemed your code you can download the app via Google Play or the App Store and sign into your account. You can also sign into Fender Play via web/desktop.View Deal

Apple has confirmed that, in light of current events, it’s offering free 90-day access to its Logic Pro X DAW so that everyone can make music with it. It’s also offering the same deal to anyone who wants to use Final Cut Pro X.

First Apple offered Mac users the chance to use Logic Pro X free for 90 days, and now Ableton is doing the same with Live 10 Suite, its flagship DAW package.

Featuring not just Live, but also a wealth of plugins and soundware, the Suite bundle also includes Max for Live, which enables you to customise and build your own devices.

Get Ableton Live 10 Suite free for 90 days
You can download the Live 10 Suite 90-day trial on the Ableton website. It runs on PC and Mac.View Deal

Zenbeats is a cross-platform production app that promises to “make music creation easy”. It features drum sounds from Roland’s TR range of drum machines, and offers sampling, instruments and effects.

Unlock Roland’s Zenbeats music-making app for free on iOS and Android
You can grab Zenbeats now on the Google Play Store and Apple App Store.

Arturia is the latest company to encourage you to stay home and make music, and it’s giving you some free music software to do it with. The biggest news is that iSpark, the company’s iPad drum machine app, is free until 30 April, but Arturia is also showing some love to PC/Mac users, who can road-test the Pigments 2 plugin synth for free between 2 April and 3 July.

Get iSpark for free
Download it now for free on the Apple App Store.

Free Pigments 2 trial
Available for PC and Mac in VST/AU/AAX formats and can be downloaded from the Arturia website.

Normally yours for $40, the AS-16 Reason rack extension is an advanced 16 channel analog CV sequencer with MIDI and audio features. At the heart of AS-16 is a user controlled sequence that can be modified in real time using the jump, skip and pad buttons.

In addition, it includes several note scales that allow you to quickly create bass lines and then tweak via MIDI, or use the built-in audio modifiers as an advanced envelope generator.

AS-16 Analog Sequencer Reason Rack Extension
Normally $40, the AS-16 is yours for gratis until 15 April. Head over to reasonstudios.com to grab itView Deal

Positive Grid is giving you the Bias FX guitar amp and effects mobile app - plus all of the available features and expansion packs - for nothing. You have until 8 April to download it on your iOS device, and it’ll run for 90 days.

Based on the same technology as Positive Grid’s excellent Bias FX desktop software, the app contains a wide array of realistic-sounding guitar and bass amps, effect pedals and studio racks for your iPhone or iPad. Signing up a ToneCloud account will unlock all of the additional content and enable you to to share and download thousands of custom presets.

Reaper 6 free until the end of June

If you’re in urgent need of a DAW to work with while you’re on lockdown, Cockos has stepped into the breach by offering free temporary licences for Reaper, its fully-featured music production software, which are valid until the end of June.

Reaper 6 for free until the end of June
Getting your temporary licence is easy: just click the link on the Reaper website, copy the key text to your clipboard and run Reaper.

Avid is stepping up to support professional Pro Tools users who’ve been asked to work from home during the COVID-19 crisis. It’s announced that it’ll make a limited number of 90-day licenses for its creative products available for free to qualified media enterprise and educational institutions.

As you might have deduced, this doesn’t mean that anyone and everyone can have a Pro Tools license - companies need to submit the request for licenses on behalf of their employees, whether they be full-time, contracted or freelance. Similarly, educational institutions need to make bulk requests on behalf of their students.

In a bid to spread “positivity, creativity and expressivity” in these difficult times, Moog Music has announced that it’s giving away its Minimoog Model D iOS app for free. An official emulation of the most famous synthesizer of all time, this runs on both iPhone and iPad, and usually costs $14.99/£14.99.

Writing on Facebook, Moog says that it hopes that the app will offer: “A moment to slow down, appreciate our innate strength, and experience the uplifting power of sound. A chance to share the way we hear the world around us…”

Minimoog Model D iOS app for free
Head over to the apple app store to grab it now. We're not sure if or when this offer will expire, so don't hang about.View Deal

Korg iKaossilator on iOS, until 31 March

Recognising that a lot of people are going to be stuck at home with not much to do for the next few weeks and months, Korg says it wants to  “help you with a musical way to occupy your mind”.

iKaossilator can certainly do that: it’s a fun and addictive loop-based app that enables you to make music simply by swiping on the screen. You can work across multiple tracks and in a wide range of genres, and a decent amount of drum, bass, lead, chord and other sounds come included. You can adjust the tempo and lock everything to a specific key so you’ll never go out of tune.

You can grab iKaossilator for iOS on the Apple App Store (free until 31 March).

Korg iKaossilator on iOS for free until 31 March
Head to the apple store now.View Deal

“We’ve received many requests from schools around the world who would like to use Soundation for remote music education due to COVID-19,” , says Adam Hasslert, CEO of Soundation. “We realized that there is a huge need for online music education solutions right now, so we’ve decided to offer it for free in order to support and encourage young music makers to stay creative during this challenging time.”

As of now, teachers and educators can sign up for a free Soundation Premium subscription and set up accounts for their students. These accounts will go live from 31 March. Teachers will also be able to create group pages in Soundation’s online community to facilitate their teaching.

Free Soundation Premium until the end of June
Teachers need to apply on their students' behalf. For details see the Soundation website. View Deal

Cherry Audio is giving away Voltage Modular Nucleus, a complete modular synth package that features 22 modules and more than 130 presets. As of now - and for the foreseeable future - anyone can download it for free for Mac and Windows.

This is great news for anyone who’s likely to have plenty of time on their hands over the next few months. Modular synthesis is something that you can really immerse yourself in, and Voltage Modular is a great platform to start on.