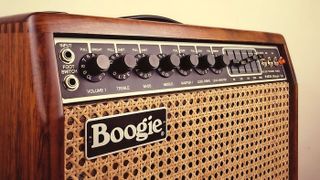 Since 1969, Randall Smith’s small company has been building some of the world’s most iconic, fascinating guitar amps under the Mesa/Boogie name.

The Mark Series initially formed the basis for modern cascaded high-gain circuits, and with the advent of channel and mode switching (a Mesa/Boogie patent) and wattage switching (yep, that too!) became a powerful and flexible studio tool for generations of musicians.

Inspired by amps like Soldano’s SLO (itself derived from earlier Mark Series Boogies) the bigger, brasher Rectifier range redefined high gain in the ‘90s, inspiring a wall-of-sound approach that dominated guitar music for over a decade.

Mesa/Boogies do tend to be rather bewildering in both their variety and complexity - and are often misunderstood.

Randall’s amps are immensely capable, faultlessly roadworthy and bewitchingly musical across a huge range of disciplines, but how does the player go about choosing the right one?

Read on, as we round up eight of the best amps Mesa/Boogie has ever produced...

Mesa/Boogie’s Rectifier range was released in 1991 and was initially aimed squarely at hard-rockers. The Mark Series had defined high-quality, high-gain amplification for a generation of studio and live musicians, but their feature-rich layout and boutique looks were perhaps beginning to feel a little too niche in the wake of simpler high-octane offerings from Soldano, Bogner, Marshall and more.

The original two-channel Rectifiers went through numerous revisions during the ‘90s - culminating in the looser, darker-sounding Revision F and G amps that simply defined the sound of hard rock and metal for the new millennium.

Mesa/Boogie then set about expanding the appeal of the Rectifier range with the flexible triple-channel heads of the early to mid-2000s.

The wonderful Multi-Watt Dual (and indeed Triple) Rectifiers neatly encompass all that is great about this heritage, packaging tone and responsiveness to match the early revisions alongside the greatest level of flexibility yet available.

Their three-channel layout hosts multiple modes paying homage to the many previous versions. It also houses flexible Multi-Watt operation, a simplified/improved effects loop and one of the best clean channels in the world.

With its intuitive layout, great looks and continent-crushing tone, the newest Rectifier is without a doubt among the best channel-switching heads on Earth.

When released in 2009, the Mark V had several very large pairs of shoes to fill. Replacing one of Mesa’s longest-running and most respected models was no easy task - and the V promised to better the IV in every department while offering accurate onboard recreations of the Mark I and IIC+.

This in itself would have represented a tall order, but Randall Smith went several steps further by incorporating Multi-Watt switching per channel, a Variac mode, one of the greatest clean channels ever devised, Mesa’s now industry-standard spring reverb, and much more.

In terms of sonic girth, the V does fall slightly short of the IIC+ and IV originals - but it packs an unbelievably fast attack and magically liquid feel that is all its own. It also contains a wonderful Crunch mode that manages to compete with the best modded Marshalls while retaining the signature Boogie liquidity and responsiveness.

The V (now nearing its 10th anniversary) is the quintessential jack of all trades as well as being master of many. It deserves pride of place in any home studio or stage environment.

The definitive high-gain Mark Series amp, the coveted Mark IIC+ offered a higher level of controllable gain than any previous iteration. In combining a brighter, gainier preamp with a wonderfully responsive and organic power section (especially combined with the post-gain graphic EQ), it essentially defined the sound of modern high gain in 1984.

Its relative simplicity of design and huge output transformer gave it girth, growl and an organic feel that remains unmatched to this day among its Mark Series compatriots (an honourable mention, though, goes to the JP-2C which appears later in this article).

The original Mark IIC+, though - as with so many channel switchers of the day - was sadly flawed in its layout. Achieving the best sound from the lead channel meant compromising the wonderful clean channel; hence Steve Lukather using several at once during his ‘80s heyday!

Tonally, though, the original IIC+ amps have achieved an unassailable Holy Grail status in line with amps like Soldano’s SLO and Dumble’s Overdrive Special; possessing a definitive blend of liquidity, attack and blistering feel that’s as at home with Metallica’s or Dream Theater’s material as it is with classic rock or soaring leads. Grab one before the prices soar even further!

At their core the same amp, these sadly-discontinued giants offer the highest levels of flexibility ever packed into a Rectifier. With a similar spread of sounds to the Multi-Watt triple-channel Rectos - but now laid out across four separate channels - the Road series amps simply offer “more”.

If you love the revised Recto clean channel - but also enjoy Tweed mode - the Road series allows you to have one of each. Two lead sounds, one Vintage and one Modern, each dialled to perfection? No problem. The Road series even plays host to a delicious Brit mode whose crackly raunch could give many Marshalls or Hiwatts a run for their money!

Yes, the classic Recto voices contained within the last two channels are a little smoother and darker than their Dual and Triple brethren - but that’s not necessarily a bad thing.

The frankly ridiculous Road King goes a step further by offering any combination of two EL34s and four 6L6s to be assigned to any channel - so your Fender cleans could be delivered through a 50W 6L6 power stage, your Marshall dirt through 50W worth of EL34s, and the lead channels could be independently dispositioned to flatten any number of buildings at whim!

A wonderfully poetic anachronism in a world of Kempers, the Roadster and Road King II amps are magnificent beasts that beg to be experienced.

This article skips over the excellent Mark III amps in favour of the more complete Mark IVs. The third Mark Series amp did offer greater flexibility than the hallowed IIC+, but in none of its many revisions did it entirely match the tonal prowess of its predecessor nor the neatly resolved operation of its successor the Mark IV.

The Mark IV offers a kind of visually complex quasi-three channel operation, carrying partially shared controls between the clean and crunch modes. It also offers a ludicrous number of voices and modes that made it the session player’s multi-tool of choice during the ‘90s and early 2000s.

Dispensing with technicalities though, at its core the Mark IV offers a great version of the exquisite Mark Series clean and breakup sounds alongside a well-judged and very useful British-inspired crunch sound. There is a degree of compromise between settings here, but far less so than previously.

The Mark IV’s calling card, though, is that it contains the “other” great Mark Series high-gain sound. Fatter and more liquid than the IIC+ but retaining much of its grind, this is an utterly definitive modern high gain sound. Typified by a significant portion of Dream Theater's and Fates Warning's work, the IV was also used to great effect by Lamb Of God in the metal world and The Offspring elsewhere.

This doesn’t begin to do justice to its flexibility, though; like the IIC+ and III before it the feel and tonality is balanced enough to bring the best out of any player, style, or guitar while retaining that unmistakable Boogie tonal heritage.

A future classic and a near-perfect Mark, the IV is one to buy cheaply while you can!

Every Mark Series amp since 1985 has really constituted an attempt to offer greater flexibility alongside the magnificent IIC+ voice - while fixing some of its operational quirks. The first to achieve unmitigated success in this brief is the JP-2C.

Containing a close replica of the original output transformer and utilising the Class A/B operation of the 60/100 models, the JP-2C delivers definitive Mark Series tone through its two assignable graphic EQ sections. Additionally, it offers seamless control over most switchable parameters thanks to its built-in MIDI.

A perfectly sorted channel-switcher for the next generation, any barely perceptible quibbles over the JP-2C’s tone and feel relative to the original can surely be accounted for by the additional layers of flexibility. All that is lacking now is a Simul-Class version for the true enthusiasts!

At the top end of Mesa’s product line, a dichotomy has always existed: the Rectifier range offers ultimate girth and hard-rock punch, while the more liquid, harmonically complex tones belong to the Mark Series.

Choosing the simpler, bigger-feeling amp always involved a degree of sacrifice in terms of musicality; and choosing their most musical, fluid and flexible amp meant sacrificing sub-low punch in favour of a tighter, bouncier feel.

Mesa has long needed a best-of-both-worlds product to sit alongside the range of near-perfect channel-switching heads flooding the market. Companies like Bogner, Friedman, Marshall, Victory, 3rd Power, Diezel, Landry and many, many more offer a channel-switcher for every taste and desired feel.

In 2018 and beyond, it’s easy to see how the Mark Series could be viewed by some as overly complex and the Rectifier something of a behemoth!

Enter the perfectly sorted Triple Crown series. With an incredibly neat and intuitive layout, three optimised channels and an immaculately judged mid-Atlantic tonality, it offers everything guitarists need and nothing they don’t. Onboard MIDI control means it can be mated directly to a modern floor-based processor, and the form factor is beyond reproach.

This tiny amp has enjoyed immeasurable success, and with good reason. It packages all the best sounds from the incredible 90W range-topper into something around half the size and weight - and thanks to its Dyna-Watt power it offers punch and projection far beyond its 25W class.

With six modes spread across two channels, there will inherently be some compromises relative to the bigger, fuller-featured amp. The most notable of these is that the delectable Crunch mode lives within the clean channel - unfortunately meaning the live user has to choose. Also, the Solo feature is gone (there simply isn’t space on the front panel!) - although it reappears on the similarly brilliant V:35.

No matter: the V:25 possesses such incredible musicality, punch and feel that any one of its high-gain modes can be manipulated into a more than acceptable mid-gain territory.

The amp’s inherent responsiveness means that a huge range of tones can be extracted simply by virtue of the guitar’s controls and the picking style of the player; leaving the first channel’s crystalline cleans (or ripping, gut-wrenching break-ups) un-compromised.

As a studio tool, the V:25 makes an even better case for itself - offering nearly all of the punch of its high-dollar brethren along with layer upon layer of flexibility. Viewed as a “real-amp” alternative to a Kemper or Axe-Fx, it will genuinely provide everything most players need and more, with a chameleonic character and breathtaking response that in some ways even eclipses its bigger brother.

Don Stick is a session guitarist and writes for Bands For Hire.