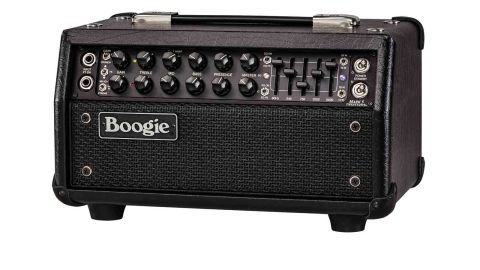 One generation before it launched the Dual Rectifier, Mesa Engineering's first amp was the Boogie - a small, powerful combo based on the Fender Princeton, which found fame on the back of a stellar debut album and Woodstock gig by Santana. Following on from the recently released and very successful Mini Rectifier heads and combos, Mesa has now unveiled an amp that looks set to raise the bar even further, the Mark Five: 25.

Based on Mesa's flagship Mark V - the latest version of the original Boogie - the Mark Five: 25 head is small, perfectly formed and typical of Mesa's superlative design and attention to detail.

Two independent channels, each with three very different voice presets, combine with Mesa's iconic five-band graphic EQ for a choice of 12 sounds. You can footswitch between the channels, with the graphic on or off for quasi four-channel operation and preset 25 or 10 watts per channel, adding more flavour to this little amp's range of tones.

One of the best features lives on the back panel: a CabClone speaker-emulated direct output, with a speaker defeat for silent recording or practice, using the built-in headphone socket.

Despite the Mark Five: 25's long feature list, it's very easy to use and its tones are sensational. The rhythm channel covers the shimmering clean tones of the modern Boogie and the fatter 'blackface'-inspired midrange of the fabled Mark I, while the Mark V crunch voice is so deep and three-dimensional you could record an entire album with it.

The lead channel is equally inspiring, with a perfect rendition of the Mark IIC's overdrive tone (arguably the most coveted Boogie sound), along with more modern distortion effects that sound unbelievably good when tweaked with the graphic.

The metal tone of doom lurks in the Xtreme voice, with enhanced lows that beg for detuned or extended-range axes. The reverb is sweet, smooth and buzz-free, which is great, but the Mark Five: 25's big ace is the CabClone, which creates the illusion of a mic'd-up 4x12 or 2x12 better than any speaker sim we've heard, hardware or software. It's quick to set up and extremely effective, particularly if you don't switch off the real loudspeaker.

The only downer is the price - because it's a head, you need a cab. Mesa's matching slant front 1x12 is a perfect pairing, but the combined SRP is just over £1,800. Yes, you get a lot for your money, but we can't quite justify the Mark Five: 25 as offering truly excellent value for the price.