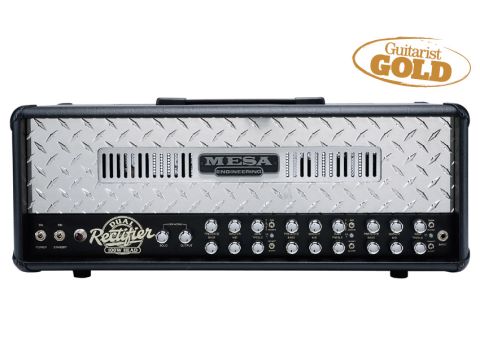 Plug into one and you'll find it very hard not to be impressed - the updated Dual Rectifier is set to be amp of the decade… again!

Long before many of the guitarists in today's metal bands had even been born, Mesa Engineering founder Randall Smith had already written his own chapter in rock history with the creation of the original Boogie amplifier. Possibly for the very first time, here was a manufacturer who was totally hip to the concept of the guitar amplifier as a musical instrument in its own right.

Players such as Santana and Larry Carlton developed a significant part of their styles based on what the Boogie could do and soon guitarists weren't only noted for being Les Paul or Stratocaster aficionados, but also 'Boogie' players.

That would have been enough for most amp designers, but in 1989 Randall and his team scored another direct hit with the amp that would provide the sound for an entire new wave of heavy rock music: the mighty Dual Rectifier. Just like the Mk 1 Boogie, the Dual Rec raised the bar at a crucial point in time and gave many players the tone they'd been craving, along with new styling that's become an icon in its own right.

The first 500 or so Rectifiers had two channels, after this the circuit was redesigned with three channels and a number of other component changes. Predictably, a mythology has since grown up around the 'pre-500' units suggesting that they're the 'holy grail' of tone, although post-500 users will usually disagree.

Now, after nearly 20 years of uninterrupted production, the Dual Rectifier has had another update. Is the new version going to be the ultimate holy grail of rock guitar tone? Before you read on, hear it in action in the following video:

In common with most other Mesa products, the Rectifier's styling, fit and finish are practically flawless. The closer you look, the more obvious it becomes that someone has thought long and hard about every aspect of this head's appearance, including things that aren't immediately obvious, such as the way it balances perfectly when picked up by its single carry handle.

Inside the immaculately presented steel chassis, the electronics are almost all PCB-mounted, with one large high-quality main board and three smaller ones for the rear panel jacks and switches, output valves and rectifier components. The wiring is neat and cleanly routed, with separate leads to all the front panel controls, making service replacement easy.

There's a lot packed onto that front panel, making it difficult to see the screen-printed writing that tells you what the function of each knob or switch is. However, most are identical for each of the Dual Rec's three channels and everything is arranged in a logical, structured way that makes the amp quite easy to understand.

Each channel has a set of six knobs for EQ, preamp gain, volume and presence, with a pair of toggle switches: one is a new feature called 'multi-watt', which lets you preset each channel for 50 or 100 watts output, the other is a voicing switch that dramatically alters the channel's gain, tone and response.

Channel one, the clean channel, has a two-position switch labelled Clean and Pushed, the other two channels now have three-position switches offering Vintage and Modern settings, plus a new Raw mode. There's an overall master volume control and a footswitchable second master volume, which can be preset for a level boost when soloing.

The rear panel is crammed with extra features: there's a slave out with variable level, five speaker jacks and a pair of send/returns for the Dual Rec's series effects loop. This highly versatile loop can now be switched in or out from the footswitch and assigned to any or all of the amp's three channels.

Over to the right is the valve tracking feature, which gives the Dual Rectifier its name - again this is now channel assignable, with three small toggle switches to preset the power stage rectifier circuit for each channel to either solid-state or valve rectification. This dramatically alters the way the amp responds: solid-state gives a fast attack with more emphasis, while valve rectification slows and squashes the initial attack.

Other features include external switching jacks for use with suitable stage boards and switchable bias between the amp's stock 6L6 output valves and EL34s. There's also a dedicated tuner output, a Bold/Spongy switch that varies the overall voltage inside the amp, and a manual channel-changing switch for use when the supplied foot controller isn't plugged in.

The controller selects channels, switches the effects loop and solo functions and also has a mute function, which cuts the sound but leaves the tuner output active. We're not sure that having a mute switch on a foot controller is a good idea - obviously the last thing you'd want is to stand on it just as you wind up for that big solo.

We'd feel happier if the mute LED was ultra-bright red instead of easy-to-miss yellow and flashed, like the Rude Solo light Mackie uses on some of its desks, to make it obvious that you aren't in performance mode. But it says something when that's all we can find to moan about on an amp laden with so many features.

Overall, the Dual Rectifier exudes an aura of pro-standard efficiency, built to handle any situation with power to spare and everything you could possibly need from a modern multi-channel guitar head.

It's anyone's guess how many gold and platinum albums have been recorded using a Dual Rectifier, but it's a pretty substantial number. When you plug in and hear what one can do for the first time, you're very quickly left in no doubt as to why this is one of the world's top rock amps.

Channel one's clean sounds are perfectly formed, with a sweet high-end, rich open mids and tight bass that's reminiscent of the best 'blackface' Fenders. The Pushed mode is ideal for blues and modern country and has plenty of range in the elusive 'just beginning to overdrive' area. It can be as sweet or aggressive as you like.

Channel two delivers devastating crunch and medium gain sounds that track fast enough to cover anything from Texas blues to thrash. The voice switch increases gain progressively through the Raw, Vintage and Modern modes and also seems to vary the amp's attack, while you can tweak things further using the multi-watt and valve tracking options to specify output wattage and rectifier types.

Channel three in full-on modern mode is where the Dual Rec's legendary distortion tones live. Featuring bold treble response, scooped mids and a huge low-end, this is the sound that's been copied on countless other products, but it's only when you hear the real thing that you realise how poor the digital facsimiles are.

The Mesa's searing liquid sustain, perfect string balance and full-throttle dynamic response are massive fun to use live and the amp also records superbly; just a little compression is all that's needed. Overdrive pedals are completely unnecessary with this amp - even using our stock Strat fitted with regular low output Duncan Alnico Pro single-coils, there's plenty of filth for the most extreme metal sounds anyone could want, with gain to spare.

As you might have gathered, we're more than a little impressed with this new Dual Rectifier. Those well-known signature sounds seem better and more focused than ever before, without sacrificing the 'almost out of control' feel that's such a big part of its character.

It may be well known for metal, but this is an amp that can easily be used for blues, country and even jazz; the clean channel is one of the best we've heard and the various upgrades improve the Dual Rec's flexibility without detracting from its intuitive usability.

As for the competition, many amps can compete with the Dual Rec in terms of features and value for money, but only a few that can match it for tone and response. In fact, the strongest competition probably comes from Mesa's own 150- watt Triple Rectifier, which surprisingly is only £70 more.

Nevertheless, despite the high price (the head and a matching 4 x 12 will set you back nearly three-and-a-half grand) we've decided to give the Dual Rectifier full marks for value for money. Why? Within five minutes of unpacking one, you could be cutting a gold album or headlining festivals on the world's biggest stages.

Alternatively, you could spend endless wasted hours in a studio with a computer and dozens of expensive plug-ins trying to duplicate the Dual Rec's tone, or spend a small fortune on pedals trying to capture its unique blend of sustain and distortion. Why wait any longer? Sell everything you own - apart from your favourite guitar! - and buy this amp. Once you've tried it, you'll understand.