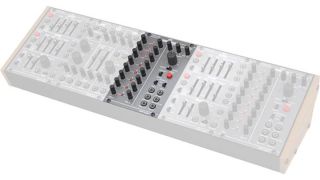 You probably could’ve put your house on Behringer moving into the world of Eurorack if its recent flurry of activity with the likes of the Neutron, Model D and Pro-1 is anything to go by.

Announcing the MusicTribe brand’s intentions of producing some Eurorack modules, Uli Behringer took to Gearslutz once again with images of three new modules that look rather similar to the Roland System 100/100M. There’s the 110, with VCO VCF VCA all in, the 140 featuring twin envelopes and LFO, while the 182 is an 8-step 2-channel sequencer.

Not content with just announcing the new modules. Uli has also used the gear forum to ask for some input from the community:

We’re not surprised at this move into Eurorack and it will certainly prove popular with attractive price points (target prices of $49-$99) and possibly more clones of older gear.

Mr Behringer would also be interested in hearing from all designers and engineers too, so if you fancy throwing your two penn’orth into the pot, we suggest you head over to Gearslutz now.