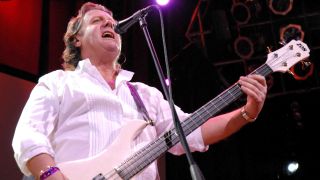 Wetton had been battling colon cancer, and according to a statement from Asia, passed away in his sleep on Tuesday morning.

Bandmate Geoff Downes shared a touching tribute to his collaborator on Facebook, stating:

“His bass playing was revolutionary. His voice was from the gods. His compositions - out of this world. His sense of melody and harmony - unreal. He was literally a 'special one'.

“But John was much more than a gigantic and unique musical talent. He was a supremely intelligent man, marked with his great observations and wisdom about life; all couched within his wicked sense of humour.”

Several music stars have shared tributes to the bassist on social media - we’ve posted a selection below.

So sad to hear of the passing of John Wetton. I had just played on a new track of his. The 2 UK albums & Crimson's Red are Prog classics RIPJanuary 31, 2017

I am very sad at the loss of John Wetton, who was a special friend, a wonderful singer and musician. He was an incredibly lovely person.January 31, 2017

RIP John WettonA legend and a friend..It was an honor to know him and work with him.January 31, 2017

Message to God. Please don't let 2017 be like 2016 with so many sad losses. Bad start already with Gordon Kaye, John Wetton & George MichaelFebruary 1, 2017