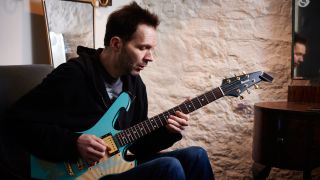 Three-notes-per-string scale shapes are a great way of accessing the maximum available notes anywhere on the guitar neck.

These positions make full use of all four fingers and cover more frets than the traditional five-position, or CAGED system shapes. As every string has the same number of notes, three-notes-per-string shapes lend themselves to patterns very well.

Here we have five approaches based in the A Minor, or A Aeolian shape, position 1. This scale has no sharps or flats, which makes it very simple and accessible to learn. The notes in the scale are A-B-C-D-E-F-G and the intervals read as: 1-2-b3-4-5-b6-b7.

Speed up your guitar solos with the fearsome 'spider' lick

For second and third strings use one, two and four because other A Minor positions which cover the entire neck, and here we are borrowing two strings from each one. Every group of eight notes moves up a position which results in a cool Paul Gilbert-style diagonal motion from low to high.

The final example is a descending run inspired by the likes of Yngwie Malmsteen or Vinnie Moore. Here we have adapted one note of the scale: every G is now a G#, which results in the exotic-sounding A Harmonic Minor sound beloved of these players.

When playing through the examples you will see that we have used a mixture of picking and legato, but feel free to experiment with mixing up the techniques: try playing all the examples as flowing legato lines, or use strict alternate picking for a more machine-like sound. You can also use economy or hybrid picking, or even blend legato and picking techniques for a more unique effect.

Play six notes on each string and ascend the scale until you have covered the fretboard from the 5th fret to the 10th. It’s important to focus on using the correct fingerings; either first, second and fourth or first, third and fourth. Blues players: avoid the temptation to play the exercise using first, second and third fingers.

Start by learning the first 12 notes of this pattern; ascend four notes, then move to the next scale note and ascend another four notes, and so on. Once you have learnt to negotiate the lowest two strings with your pick and fingers, the rest of the scale follows the same logic.

Pick the initial note of each string lightly and use hammer-ons and pull-offs to ascend and descend the five notes evenly. As you play each string, your starting finger alternates between first and fourth. The secret is to plant those fingers on the downbeats and let the notes in-between flow evenly.

This lick moves through all seven positions of A Aeolian. After the first eight notes, shift your hand up a postion, then do the same again, and so on. You should take some time to learn the other six shapes, but this type of lick shows the incredible potential of unlocking the entire fretboard.

This pattern is a mirror image of Example 1. That said, the Harmonic Minor scale shape has wider minor 3rd stretches (the Aeolian doesn’t), so keep your fretting hand relaxed and light on the fretboard to allow the fingers to fall into place naturally.