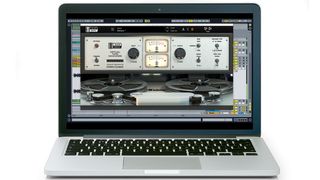 Saturation is a defining factor in ‘that analogue sound’. It can make sounds fat and beefy, smooth and warm, or crunchy and edgy. Placed strategically on single tracks and buses, it can produce a more cohesive mix.

The most obvious effect is the addition of harmonic content, most easily heard on sounds that don’t have much to begin with, such as subby sine basses. By adding upper harmonics, a deep bass that vanishes on smaller speaker systems magically becomes audible. Generally, transistor distortion adds sharpness and crunch, and valve and tape are associated with warmth.

Sharp transients can be bothersome, but saturation can effectively control them. Used gently, it can invisibly reduce peaks, gaining headroom, while stronger settings audibly soften and ‘smoosh’ transients while retaining - even emphasising - lower punch and impact. Try it on ticky hi-hats for an audible example.

Saturation is also a form of dynamic control, attenuating loud parts of the signal. Tape in particular has squashy, compression-like qualities, as do some valve saturations.

Where you place saturation can make a profound difference to the end result, and in this walkthrough we'll demonstrate various ways of stacking saturation plugins to great sonic effect. Check out the audio examples for each step at the bottom of the page.

Step 1: By using multiple stages of gentle saturation throughout a mix, you can add firmness, density and texture. Start by loading the WAVs 'HipHop…' (click here to download) onto audio tracks in a 95bpm project. Let’s start with the bass - solo it and you’ll hear that it’s basically a sine wave. There are an extra four bars on the bass track containing one sustained note, which we can use as a test signal for frequency analysis.

Step 2: On the bass track, add an analyser plugin like Vengeance’s Scope CM in Spectrum mode to see the single harmonic of the bassline. Add 6X-500 CM before it and increase the Gain as shown. This preamp transistor distortion adds odd harmonics. Now bypass it and do the same with Premix CM - we can see that this valve sim adds plenty of even harmonics, too.

Step 3: Next we try Slate Digital’s Virtual Tape Machines, which adds a strong third harmonic, along with tape artefacts like hiss. This one works best for us, with Input set to +15dB. Even this fairly mild saturation benefits our bassline, as the added harmonics make it audible on sound systems that can’t fully reproduce the deep fundamental tone.

Step 4: Now solo the snare track and add Soundtoys Decapitator to it. Despite the brutal name, it gives great preamp-style saturation if you don’t overdo it. Set Drive to 5 and click through the five distortion Styles (A, E, N, T and P) to hear their differences - hear how they respond dynamically, too. We like mode T, a triode valve sim - pull Drive back to 2.5 for a more subtle effect.

Step 5: The distortion has had two undesirable effects: the snare is louder and its transient not as punchy. To fix it, pull Output down to -4dB to compensate for the level change, and pull Mix down to 85% (click the knob labels to show their values) to blend some of the dry, undistorted signal back in. This parallel distortion technique is very useful for preserving punch.

Step 6: On the kick drum, we use Decapitator once again, with Drive at 3, 85% Dry/Wet, and Style A, modelling an Ampex 350 tape preamp. Next, route tracks 1-5 to a group bus so we can glue them together with more saturation with Slate Digital’s Virtual Tape Machines, with Input at 9dB. For a final touch, we use a tape emulation on the master bus. The end result is a deeper, fatter, more analogue mix.