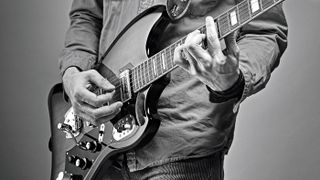 Unlock the fretboard and play chords across the neck with this ingenious system. You’ll never look at the guitar the same way again!

The system we’re talking about is known as the CAGED system, so called because it refers to those beginner chord shapes that we all know in open position (ie, open C, A, G, E and D chords).

5 easy ways to liven up your guitar chords

The idea of this technique is to rearrange these five shapes as barre chords and move them around the fretboard. Sounds tough? Well, no. It’s actually easy to learn because all the shapes link together in a logical way - and it works with minor chords too.

Rather than repeat lots of boring exercises, in this lesson we’ve tried to make these examples as musical and ‘real world’ as possible. From Jimi Hendrix to John Mayer, all the great guitarists use these shapes, perhaps without even thinking about them, simply finding the best one for the right moment.

Generally, it’s good practice to avoid big leaps up or down the fretboard as this can be awkward for the fingers, but the real beauty of this system is that you can experiment to find what sounds good to you.

This is the all-important starting point. Learn each of these shapes, noting the slightly awkward note in the G shape that we’ve put in brackets - most guitarists don’t tend to play this note. The bracketed note in the E shape can be played, but it illustrates that you don’t have to play every note of the chord. Hendrix rarely would!

This reggae groove passes through all five CAGED chords, this time using minor shapes and in a much more musical way. If in doubt, refer back to the five open-position chords (and their minor variants) to see how our rhythm part relates to those crucial basic shapes. Note that the shapes used are written in brackets over the music.

Notice how simply changing the bottom note of the E chord turns it into C#m7 - all the other notes stay the same. This ‘sharing’ of common notes is key to unlocking the fretboard and learning how shapes ‘join up’. If the final Amaj7 chord had, for example, an 11th fret C# note on the fourth string, it would transform into a C#m chord.

This tricky sequence places every chord a 4th interval higher than its predecessor. Don’t worry if you don’t understand the theory - it doesn’t matter for now. The key here is the efficient movement of chords. With so many potential CAGED shapes at your disposal you can play this progression with no big moves up or down the fretboard.

Once you’ve tried the tab exercises and had a go at creatively adapting them in different areas of the fretboard, you’ll start to see these connections like a jigsaw puzzle all over the neck - this can have a huge impact on your versatility as a player. Experiment by trying one or two of these different shapes in your next jam.

It could be as simple as playing a familiar chord progression in a different area of the fretboard. Integrate these ideas and your knowledge of the fretboard and your ability to improvise will increase.