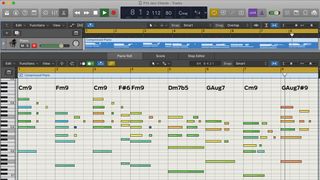 From a music theory perspective, jazz, gospel and funk are probably the most technically advanced genres, with exotic chord names like ‘minor seven flat five’ and ‘augmented seven sharp nine’ thrown about with abandon.

We’re not going to go too deep down the rabbit hole here - there are entire books dedicated to the subject on its own - but essentially, jazz is all about altering the chord in some way to make it sound different, while at the same time maintaining the basic harmonic progression of the tune.

Occasionally, just one note - usually a fifth or ninth - will be altered, or maybe a chord will be swapped out for a totally different one that has the same function in the progression - a tactic known as substitution.

On this page, you’ll find formulae to some of the more common altered chord types you’ll need to be aware of if you intend to start exploring this type of sound.

The minor seven flat five (m7b5) chord is the jazz muso’s secret weapon. It’s derived from a regular minor seventh chord but with the fifth moved down in pitch (flattened) by one semitone.

We’ve composed a short progression using some of the more common chord types in jazz, funk and gospel styles.

The first four bars are alternating Cm9 (C-Eb-G-Bb-D) and Fm9 (F-Ab-C-Eb-G) chords. However, just before the second Fm9, we’ve inserted a passing chord - F#6 (F#-C#-D#-F#-A#. Passing chords are chords that you ‘pass’ through to get from one chord to another - the F#6 works because its notes are nearly all one semitone away from those of the target chord (Fm9).