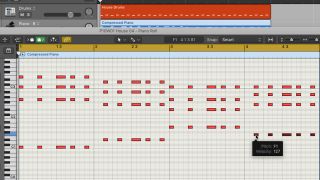 Two-handed piano jams are the staple diet of classic house, so let’s look at how to program one from scratch.

We’ll start with some basic chords, then work on the rhythm, before using some music theory magic to create extra house authenticity.

Step 1: Start with an empty project or DAW session at about 124bpm and create a software instrument track loaded with a piano sound. Open the piano roll and draw in the notes G2, C3 and E3. Make this C major chord last for a duration of one 16th-note.

Step 3: Next, double the duration of the third chord in each bar to two 16th notes. Copy and paste these two bars to make a four-bar section, then transpose the chords in bar 2 down by two semitones to make Bb major (F-Bb-D). Rearrange the notes in the third chord to make a 1st inversion C minor (Eb-G-C), then make the fourth chord an F major (F-A-C).

Step 4: Now for the magic. Copy and paste the lowest note of each chord to form a left-hand bassline. Place the new notes on C1 in bar 1, Eb1 in bar 2, Ab1 in bar 3 and F1 in bar 4. By adding new bass notes to the original right-hand triads to form new chords, this effectively transforms our vanilla C-Bb-Cm-F progression into a house-tastic C-Bb11-Abmaj7-F.