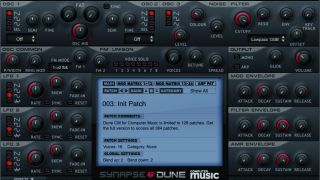 In the late 80s and early 90s, the explosion of dance music styles that accompanied the rave scene (house, techno, hardcore, jungle, etc) gave birth not only to a social movement, but to a number of music production techniques, too. Much of this music was being made in budget home studios with repurposed and forgotten equipment, so the focus was squarely on ingenuity and experimentation.

Step 1: Common on synthesisers in the late '80s, chord memory let you play back chords with one note, and was a popular trick of the time. Let’s see how we can do it using a synth and sampler. Create a new 120bpm project in your DAW and instantiate Dune CM. Load in Beat.wav, Bass.wav and C major chord.mid.

Step 2: We need an analogue-style patch to sample. Start with Dune CM’s ‘Init’ patch and turn up Osc Mix to 50%. Detune Osc A with the Fine rotary to -5 cents and Osc B to +5 cents. Bring up Osc C’s level to around 30% and increase Colour to taste. Lower the Cutoff and Resonance a little.

Step 3: Our sound is still a little static, so let’s use Dune CM’s Fat dials to add some chorus-like movement – 10-15% for both Oscillators 1 and 2 should do the trick. Don’t worry about shaping the sound’s amp envelope for now, as we’ll be resampling the sound…

Step 4: Export the synth chord to an audio file, then load up a sampler in your DAW. We’re using TAL-Sampler, but any decent sampler plugin will do the trick. Import Chord memory.mid to trigger it, then drag your exported audio file onto Layer A of the sampler.

Step 5: Shape the chord’s amplitude envelope with the sampler’s controls. Increase Attack to .10, Decay to .30, reduce Sustain to .90, and Release to .50. Experiment with a shorter release time for a more staccato sound. Our chord sample is bright, so reduce Cutoff to 15kHz. Add a touch of reverb for width and flavour.

Step 6: TAL-Sampler is great at emulating old hardware samplers, so have a play with the Resampler section. We like the sound of the S 1000 DAC Type’s Saturation at 50%. Dial in a tiny bit of Hiss for a more authentic, vintage vibe.