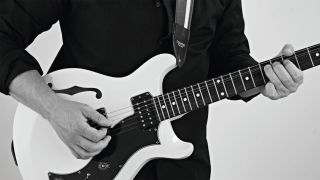 String bends can make your solos more lyrical and expressive. Get started with this simple guide...

“Okay, so I’m not an idiot, I’ve worked out what string bending involves, but, tell me, why bother?”

Well, those pesky frets can make things sound a bit lumpy sometimes as there’s a defi nite point where one note changes to another (ie, as you change frets). Bending the string allows a smooth movement between pitches, which can give your playing a much more vocal, expressive sound.

“So where can I hear this lyrical sound in action?”

David Gilmour is one of the greatest string benders of all time, blues legend Buddy Guy is pretty ferocious and for total out-of-this-world stuff check out Guthrie Govan.

Guitar basics: how to use vibrato

“Guitar geniuses aside, where do I start?”

The basic idea is simple. You’re going to push the string up or pull it down to raise its pitch. Generally, you move in the direction that has the most space - so pulling the second string downwards will mean you quickly run out of fretboard space. To play our first tab example strike the third string at the 7th fret and push the string up towards the ceiling.

A combination of the tab and your ears will help you. Look at the tab: you’ll see a note in brackets just after the note you’re going to bend - this is your target note. Bend the starting note until it matches the pitch of the target note. Try playing the target note without a bend first; this helps you attune your ear to the pitch you’ll be bending to.

“But the string is barely moving. Please help!”

Don’t panic! Bending can feel tough at first. Start by recruiting all available fingers to help out with the bending. Our tab examples use your third finger to bend, so make sure your first two fingers are tucked in behind the fretting fi nger to give maximum support. Also try hooking your thumb over the top of the neck. This is often considered poor technique, but the rules are different for string bends. Most players use their thumb for extra leverage and control.

“Is this the only kind of bend I can do?”

Definitely not. There are lots of variations: you can bend by any amount you can manage, you can re-pick bends, bend the note before you strike the string, bend more than one string at a time and you can even combine them with un-bent notes. But, just for now, focus on the basics and the rest will follow soon enough.

Bar 1 is played without any bends; bar 2 is the same, but using a string bend. Listen to the note at the eighth fret so you know the pitch you are aiming for.

This simple lick has one bend of a tone (two frets) for you to focus on. Practise slowly at first and use the target note of the bend to guide you.

Two steps to getting it right...

1. Hooking your thumb over the top of the neck will help with leverage

2. Use all available fingers to support the finger that’s bending the string