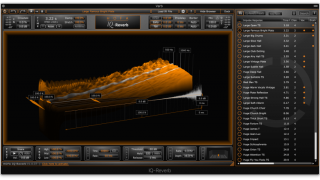 With our explainers, the aim is to deliver concise, explicit information on how to do specific recording/audio-related tasks. This instalment describes how various reverb parameters affect your sound.

Whether you're using outboard gear, guitar pedals or software plugins, this article will provide a glossary of the terms found in most reverb units.

Hall and Room are self-explanatory. Plate emulates the plate reverbs common in the ’60s, which were often used for vocals. Inverse creates a reverse reverb effect, where the reverberation starts at a lower level and increases to a higher level. Spring types emulate old mechanical reverbs known for a “sproingy,” metallic sound. Gated reverb has a decay that cuts off abruptly below a certain level. Convolution reverbs load a sample (also called impulse) that defines a room’s characteristics, and impresses these characteristics on the signal being reverberated.

Larger sizes typically correlate to longer reverb times and possibly a wider stereo image. As even synthetic rooms can have standing waves, if the reverb sound has flutter (a periodic warbling effect), vary this parameter in conjunction with decay time (described later) for a smoother sound.

Simulates the amount of time it takes for a sound to leave its sound source and create a first reflection. Setting a slight pre-delay offsets the reverb from the dry signal, which can prevent reverb from “stepping on” the signal being reverberated. Also, increase pre-delay to give the feeling of a bigger space; for example, large room sizes tend to work well with significant pre-delay.

• The 10 best reverb pedals 2020: our pick of the best guitar effects
• How to create rumbling techno kick drums with reverb

This determines how long it takes for the reflections in the room to run out of energy. Long reverb times may sound impressive on instruments when soloed, but rarely work in an ensemble context (unless the arrangement is sparse). Reverb presets often link the decay time and room size parameters so you don’t end up with, for example, a small room with a very long decay. However, “wrong” settings can sometimes create useful sounds.

With softer surfaces (e.g., a hall packed with people), the reverb tails will lose high frequencies as they bounce around, producing a warmer sound with less “edge.” If your reverb has an artificial-sounding high end, add damping to create a warmer sound. Damping affects overall tone, so setting it “oppositely” often works well (lots of damping with a bright-sounding song to warm it up, little damping if the song needs more “air”).

This reduces the high frequencies going into the reverb. If your reverb sounds metallic, reduce the highs starting at 4–8kHz. Remember, many great-sounding plate reverbs didn’t have much response over 5kHz.

Use this to reduce low frequencies entering the reverb. This can prevent a muddy, indistinct sound that takes focus away from the kick and bass. Try attenuating from 100–200Hz on down.

Some reverbs allow expanding or collapsing the stereo image.

For reverbs with modulation, this determines the rate at which modulation changes occur.

This is similar to early reflections diffusion but affects the reverb “tail.” Many reverbs use a single control for both diffusion parameters.

With reverbs having separate decay times for high and low frequencies, this sets the decay of high frequencies. A longer high frequency decay gives a brighter, more ethereal type of reverb that can sound great on vocals as it adds more reverb to sibilants and fricatives, while minimizing reverb on plosives and lower vocal ranges.

With reverbs having separate decay times for high and low frequencies, this sets the decay of low frequencies. A longer low frequency decay gives a bigger, more “massive” type of reverb that’s more like a large live space, but when used to excess, can give a “muddy” sound.

This sets the dividing point between the high and low frequencies mentioned above.

Use this to edit the balance of dry and reverberated sound. If the reverb serves as an insert effect, set this for the desired blend. If the reverb is a send effect, this is usually set to reverb only, with the return control determing the overall reverb level in the mix.

For gated reverb, this sets the level below which the reverb tail is cut off. Using relatively high gate settings was a popular effect in ’80s synth-pop.

When using gated reverb, this adjusts how long it takes for the reverb tail to decay after the reverb signal passes below the gate threshold.