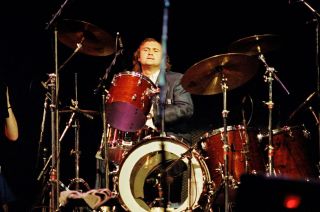 Every decade has its defining sounds: the tonal building blocks and production trends that distinguish them from what came before, and much of this is dictated by technology.

In the '80s, this reached a tipping point: synthesis had advanced, sampling was born, drum machines were introduced, and multitrack recording to tape reached its pinnacle in terms of the number of tracks available.

The resulting sound is a huge meting-pot of influences and ideas, many that indelibly date-stamp them as being ‘of the time’.

A key ingredient in the huge sound of the '80s is gated reverb - most notable on drum sounds. Punchbag snares that explode from the speakers and seem larger than life, toms that pop followed by a thunderous sustain before abruptly cutting off. But the effect was actually born by mistake in 1979 during the recording of Peter Gabriel’s third album.

With time on his hands during a Genesis hiatus, Collins took the opportunity to offer his drumming services for other projects, starting close to his day job by working with then-bandmate Gabriel at London’s Townhouse Studios. Townhouse, which had been built a year previously by Virgin’s Richard Branson, was home to an SSL 4000 mixing console.

“The whole sound really was discovered when Phil was in playing drums on a song called Intruder,” Producer Hugh Padgham explains. “Phil was a guest player on the album and he was mucking around with a drum sound. The Solid State Logic console was quite new then and it had a compressor/noise gate on every single channel which before that had never happened. [Before] you had external compressors or external noise gates but you had to patch them in, whereas with the SSL it was in every single channel. All you had to do was press a button and it was on.

"The whole essence of the sound is the compression of it which makes it sound really fat and then the second that there is a lull in the sound the gate just shuts it off. The drums were in a very live room; when you compress a sound in a live room it brings up all the background noise and the echo in a room. Therefore, when you go from something sounding big to nothing, you get this feeling of massive contrast. That is the whole essence of why the sound was so interesting because it is going from all to nothing in milliseconds.”

As well as the state-of-the-art channel strips, the SSL had a number of additional features that allowed for greater flexibility in the studio, one of which was the inclusion of a built-in talkback circuit which worked with a dedicated mic placed in the room. Unlike previous talkback setups, which could take up a valuable channel on the desk, the SSL’s was separate from the channel inputs, and incorporated an aggressive compressor.

“On the Solid State Logic console there was what's called a Listen Mic, which was also a new feature on that console. If you needed to listen to somebody talking in the studio in the old days you had to either listen through the microphone that they were playing into or put up a separate microphone that they would talk into and that's how you would communicate with the artist. Solid State Logic decided to have a dedicated microphone hanging up in the [live room] that, if you pressed the button on the console it immediately let you listen to them speaking, so in other words you didn't have to plug in a separate microphone.

“They designed it with a huge great compressor on it as well, so that if somebody was talking quietly in the corner you'd still hear them as well as if somebody was shouting at you in the middle of the studio.

"When Phil was playing the drums one day, I opened this microphone to speak to him to hear what he was saying while he was still playing the drums and out came the most unbelievable sound. Everyone went, 'Oh my god, that sounds incredible'. So we go 'OK, that was the compression on the [Listen Mic]'.”

However, as the Listen Mic circuit was designed solely for communication between the control and live rooms, it wasn’t routable to the desk’s main busses. Impressed by the sound, Padgham immediately went about replicating the huge, compressed room sound through the SSL’s channel inputs to make use of the onboard compressors.

“We had the compressors and noise gates in each channel so I said OK, let's put up some room mics, listen to the drums through those and compress them. That's what I did, but we hadn't discovered the noise gate side of it yet. When I pushed the button for the compressor on the console, there was a noise gate already in the chain. Phil stopped playing and the sound suddenly went to nothing [as the gate kicked in]. It was like, 'Oh my god, that's amazing’.”

The sound could have been completed there, but dissatisfied by the combination of carefully positioned room mics and the SSL’s channel compression when trying to recreate the sound he first heard, Padgham had a further solution.

”The compressor [on the channel] didn't sound as good as the one through the Listen Mic. The next day I got the maintenance engineer to take an output from the Listen Mic - because it was only rigged up to work on the monitors, you couldn't record it.

“So we fed [the re-routed signal] into the console as a separate channel so that we got the compression sound from the Listen Mic that we were then able to record. Because it was coming into a channel on the desk I could then also use a noise gate on the desk.

"It sounds rather complicated but that's basically how that drum sound was invented and was able to be recorded onto tape. We had this drum sound that was amazing and Peter thought it was amazing. There was no song there at all but he said to Phil, let's just record you playing that drum pattern for five minutes and I'll write a song around it. We had a very simple metronome, or a very early drum machine so that Phil could play exact time, because he wasn't playing to anything other than himself.

"Peter wrote the song Intruder around that and that's what you have to listen to, that was the, not wanting to use the word, genesis of that drum sound to make a pun out of it!"