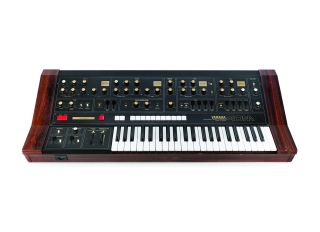 Yamaha has produced some of the most significant synths in the relatively short history of electronic music, and the CS-40M may be one of the most unfairly ignored in the company’s history.

Coming in a mere three years after the CS-80, it failed to leave much of a lasting impression. While many manufacturers were clamouring to catch up with the lofty and expensive Prophet-5, Yamaha gifted the CS-40M with a few niceties that had earned the P-5 a perennial spot on retailers’ backorder docket.

Like the Prophet-5, the CS-40M offered polyphony – only less of it. A duophonic mode let users lay out simple two-note chords. It wasn’t much, but one more note than most others in its price range! And with a wide allotment of CV and trigger inputs at the back, you could make interesting sequencer lines.

Like the Prophet, the CS-40M offered patch storage. 20 battery-backed memory slots could be used to store one’s own creations, with the never-popular-but-ever-present tape backup option on offer, too.

The synthesis engine itself offered options from across the Yamaha line of the day, and surpassed that of many more expensive units. Voices consisted of two oscillators (four, really, because it was duophonic), each with the usual trio of triangle, saw, and pulse/square waveforms. Pulse width could be modulated, and there was a two-stage envelope generator especially for the oscillators.

Noise was available at the Mixer, which pumped the preceding into a multimode resonant filter (not self-oscillating, alas). The filter had its own ADSR, as did the VCA. Envelopes could be inverted and quintupled in length. As with the CS-80 and 60, two sine waves at the VCA beefed things up even more.

A nice ring to it

Speaking of the CS-60/80, the ring modulator so beloved from those units was carried over to the CS-40M, with controls for both Speed and Speed Depth, and it could be lashed to the VCO’s envelope, with both negative and positive polarity on offer.

Fine features, then, but what really made the CS-40M stand out was its LFO. There was only one, and it offered five waveforms, including a random option. Speed Depth could be modulated by the VCO envelope, and Repeat and Trigger modes were available. The truly remarkable bit is that the aforementioned waveforms were selected by a knob at each potential destination. This meant that an oscillator might be modulated by a square wave, filter by a random wave and VCA by a sawtooth, simultaneously and in sync. Brilliant!

Performance features included Portamento/Gliss, Unison, and switchable and adjustable envelope Sustain modes. A Brilliance knob gave quick control over the filter, and the Pitch bend wheel could be set to Octave, Fifth, and Third intervals. The Mod wheel could control the VCO, VCF, or both.

Obviously, this was an instrument to be reckoned with and it’s only now being valued accordingly. A mighty, misunderstood machine, and one well worth exploring. Given that the CS-40M was universally overlooked at the time of its release, it comes as no surprise that there are few software alternatives.

Side-stepping the better-known CS-80, UVI turn to the later Yamaha analogue beasties for this sample-based software instrument. Combining samples from the CS-40M, 70M, and 20M with a bunch of stuff from the CS-01, this colourful conglomeration captures the character of the wood-encrusted ‘M’ series, and adds plenty of modern features, too.

Many owners of the mighty CS-80 dreamt of a less delicate option, and the CS ‘M’ series was that. Time has a way of frosting the lens a bit, and nowadays the CS-80 and its smaller siblings demand high prices. They share many similarities with the CS-40M, including that lovely ring modulator, making this big, brassy clone from Arturia a reasonable substitute.

KX77FREE has offered awesome emulations for Windows for ages now, and their Kx-Polym-CSE repurposes their popular Kx-PolyMod plugin as a clone of Yamaha’s flagship in the ‘M’ series, the CS70M, complete with a CV/Gate sequencer module. The six VCOs can draw on the original CS waveforms for an authentic CS experience.