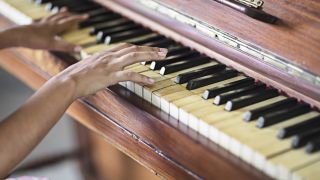 What has always appealed to me about Afro-Cuban music is that it's simultaneously pianistic and percussive. Unlike in traditional jazz, the piano's role is often to play a repetitive rhythmic pattern known as the montuno or tumbao.

Much of the magic in Afro-Cuban music comes from the fact each instrument in the rhythm section (including bass, congas, timbales, and bongos), has its own tumbao, which interlocks into a rhythmic matrix. To get you started in your own Afro-Cuban piano adventures, here are some typical piano parts I play in this style.

Ex. 1 illustrates a tumbao adapted for piano from the tres, a six-stringed guitar from Cuba, and is often used for effect when a more traditional tumbao sound is desired. I play this pattern on the song "Pueblo Nuevo" on my CD El Medico de Coqui. This basic rhythm is developed in the next four examples.

Ex. 2 demonstrates a montuno pattern played over a I-IV-V-IV chord progression, which is very common in Latin music. When constructing a montuno, you often play octaves on the root, third, and fifth. Here, we're playing octaves on the third of C, the root of F, and up a half-step to an octave on the root of G.

Pablo Moya, a great tresero from New York City, showed me Ex. 3. This is another instance of the strong link between the tres and the piano in popular Cuban music. Notice the movement in octaves between the root of C, the third of F, and a half step-up to the third of G.