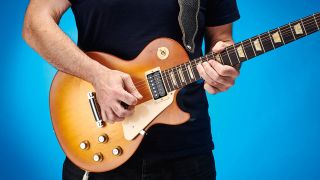 Whether it’s the fuzz-fuelled lo-fi riffing of The White Stripes and The Black Keys or the Zeppelin-like hard rock sensibilities of Rival Sons and Greta Van Fleet, it’s fair to say that blues guitar has evolved somewhat in recent years.

Though many of the chords and scales owe a debt to earlier forebears, many bands are putting their own stamp on blues with retro-inspired drive 21st Century Blues - Octaver Lick tones and tone-bending effects like octavers and wild fuzz distortions.

Here we're looking at a few of the tricks and riffing tropes of the current generation of blues players.

Listen to Dan Auerbach’s solo in Lo/Hi and you’ll hear biting fuzz distortion and the thick sound of an octaver effect doubling the notes he plays an octave apart. Like traditional players, modern blues-rock bands use the minor pentatonic scale extensively - this E minor lick will help you hone your blues licks, whichever era you prefer.

Spiky fuzz distortion tones have been a big part of the retro sound of bands like The Black Keys, Rival Sons, The White Stripes and more. Using a regular drive pedal? Keep the treble high, roll off a little bass and experiment with your amp’s EQ and gain too.

From Robert Johnson and Elmore James to Derek Trucks, Gary Clark Jr and Dan Auerbach, slide has long been at the heart of blues. Our simple lick will help you develop this tricky technique. Place your slide on your third or fourth finger and aim directly over the fret you're playing (not behind it). Use your first finger to minimise string noise.

Contemporary bands’ minor pentatonic riffs owe as much to 70s rock as they do to early blues. Our simple riff could easily be a Black Keys tune, a Led Zeppelin line, or you could slow it down and give it a traditional Hoochie Coochie Man treatment. It’s in E minor so the sixth string can be used as your tonal centre to bounce the other notes off.

The advent of multi-track recording in the 70s saw bands double-tracking guitar riffs. In recent years duos like Royal Blood have used switching systems to recreate the effect in live gigs. Our riff is ideal for two guitars.

Here we’re playing a simple melodic line on top of our previous riff. To make sure it stays riffy we’re following the same rhythm for both lines - no solo widdle here! It’s based on the E minor pentatonic scale throughout.

Riffing in a duo

If you’re playing in a duo, White Stripes-style, you’ll need to think about ways to fill out your sound. Here, we’re covering plenty of notes to provide a full backing sound, then punctuating them with some fat sounding powerchords. For more weight, think about using an octaver effect as Jack White, Dan Auerbach or Mike Kerr might do.

On The Black Keys’ Eagle Birds, Dan Auerbach takes a traditional approach to his solo - using minor pentatonic licks that kick the proverbial rear end but are simple enough to be memorable ear worms. Have a go with our lick.