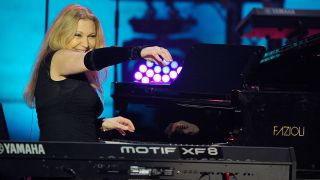 Pianist, composer and singer Eliane Elias is one of the most acclaimed musicians on the music scene today. Born in São Paulo, Brazil, Elias began playing piano at an early age before moving to New York City in 1981; there, she launched her career performing with acts such as Steps Ahead. In 2015, Elias made the journey back to her homeland to record Made in Brazil, which recently won the Grammy Award for Best Latin Jazz Album. Here are a few exercises inspired by selections on the album so you can put some of Elias’ musical grace into your own playing.

Ex. 1 is inspired by Elias’ simmering Fender Rhodes on the opening track, ’“Brasil.” Her playing paints the song’s harmony with the use of clever arpeggios and subtle chromatic embellishment. Notice the appearance of standard jazz chord voicings in the left hand with an easy, offbeat right hand solo line. The notes in bars 1-2 outline the Amin9 chord with a descending arpeggio from the ninth. The G# in bar 2 is a slight chromatic embellishment of the tonic and morphs into a bebop inspired line over the C min/maj7 chord. In the beginning of bar 3, we approach the target note C from a step above and half step below before playing another arpeggiated shape that ends on the dissonant B natural.

Ex. 2 takes its inspiration from Elias’ playing on the Jobim tune “Aguas de Março” (“The Waters of March”). Here, Elias weaves an improvisational line highlighting the corners of the chord progression. In bar 1, we have the same approach as in Ex. 1, targeting a note from a half step below and a chord tone above. Notice how we embellish the Bbmaj7 chord by playing an arpeggio of its chord tones (Bb, D, F, A). At the end of the bar, we have a tritone substitution with a 7sus4 sound. Bar 2 uses notes from the E Mixolydian mode (E, F#, G#, A, B, C#, D, E) in the right hand and a dense voicing in the left hand that features a sonorous eleventh (A) in the middle. In bar 3, we dance around the tonic in the right hand with the Eb Ionian mode (Eb, F, G, Ab, Bb, C, D, Eb) featuring an Eb6 arpeggio in the last half of the bar. The line ends in bar 4 with the Gb highlighting the major to dominant tonality change. In your own lines, try to call attention to the big changes in harmony by using the modes and chord tones to create efficient solo lines.

In Ex. 3 we see a Bossa Nova comping pattern often used by Elias. Comping patterns in Bossa Nova are quite free, unlike the static patterns found in Cuban music. Here, we start our rhythmic phrase with two downbeats, then four off-beats. These syncopated stabs add gentle propulsion to the rhythm. Our voicings are in classic jazz piano style. The first two bars have a common Bill Evans shape with the harmonic motion of min7 to third scale degree at the end of the first bar. Notice that the left hand contains the defining chord tones of the progression—Eb (the minor third) and Bb (the seventh)—which moves to the third of the next chord, A. In bars 3-4, the minor third (Ab) and flatted ninth (Cb) stay in the left hand as an interesting voicing of Bb13b9#11 appears in the right hand at the end of bar 3. Try to find these interesting alterations in your own chords, but be careful to keep the harmony of the soloist and melody in mind to avoid clashes.

In Ex. 4 we investigate the symmetry of the Diminished scale. Our first bar begins with a rather common Bmin11 voicing much like the ones from previous examples. The right hand part arpeggiates the chord up to the thirteenth and that’s where the fun begins! The right hand plays a pattern of major thirds descending by a minor third. Because the Ab diminished scale (Ab, Bb, Cb, Db, D, E, F, G) is a symmetrical scale, whatever line you play can be transposed up or down in minor thirds as long as all the notes stay in the scale. Notice that this line will also work very nicely over G7#9#5 chords if the scale is started a half step below its root, in this case G. The last two bars have a very simple ii-V progression ending on the #11 in the right hand.

Ex. 5 is inspired by Eliane’s two-fisted lines on “No Tabuleiro da Baiana.” In this example, we simply double what the right hand is doing in a lower octave in the left hand. Sometimes, it’s a nice change of texture to play two-handed lines to take a break from dense chord voicings and to add some punch to your solos. Here, the notes all come from the scales associated with the chords. In bar 1 we use the G ionian mode (G, A, B, C, D, E, F#, G). In bar 2, we begin with an arpeggio up to the flatted ninth then back down and up on an A dorian Mode (A, B, C, D, E, F#, G, A) before we use a slight chromatic embellishment to approach the A note of the last bar, first beat. The line then descends quite naturally down a D mixolydian mode (D, E, F#, G, A, B, C, D) in the last bar.

“The biggest thing to notice about Eliane Elias’ playing is how deceptively simple it sounds. It never overtakes her vocals and faithfully serves the compositions at hand with seemingly effortless chords and lines,” says keyboardist and composer Brian Charette, who has performed and recorded with artists such as Joni Mitchell, Michael Bublé, and Rufus Wainwright. Charette won Downbeat magazine’s “Rising Star Organ” award in 2014 and recently released the album Alphabet City. He also has a new book out entitled 101 Hammond B-3 Tips: Stuff All the Pros Know and Use. Find out more at briancharette.com.