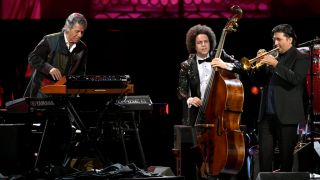 For over five decades, Chick Corea has inspired and delighted legions of fans and musical disciples. Like his former employer Miles Davis, he can’t be pigeonholed. Chick’s musical endeavors span from Mozart to Monk. Any musical situation Corea participates in contains a strong, immediately identifiable creative core. I can say from my personal experience playing piano duets with him that his energy and openness are contagious and inspiring. The following concepts are just the tip of the iceberg, but if you incorporate them into your own playing, you’ll be channeling Chick’s core.

Ex. 1a illustrates five-note scales that Chick often incorporates into many of his right hand lines. The quartal (fourth-based) left-hand structures are signature chords that compliment the pentatonic scales.

Ex. 1b demonstrates how Chick sometimes anchors his quartal voicings with those constructed from roots and fifths.

Ex. 1c is a right-hand pentatonic-based line with a signature Corea stamp: the grace note.

Ex. 1d puts all these components into action. Check out Chick’s album Now He Sings, Now He Sobs for more examples.

Ex. 2a illustrates how Chick’s accompanying is so compelling that it can work as solo piano. Again, notice his frequent use of quartal voicings.

In Ex. 2b, Chick uses diminished structures, built from second inversion triads in the right hand over quartal voicings in the left.

Ex. 2c uses quartal structures underneath right major triads. Many of these comping techniques can be heard on Chick’s arresting album Three Quartets.

In Ex. 3a, Chick uses a melodic line in the tradition of Bebop pioneer Bud Powell (a major influence), distributed between two hands, and at lightning speed. Ex. 3b demonstrates how Chick often thinks of each finger percussively, like a drummer.

Notice how distributing these patterns between the right and left hands lets you execute them fluidly.

Chick was one of the first musicians to use the six-note augmented scale, as well as one of the first to play the major seventh chord with a sharp fifth. Demonstrated in Ex. 4, this dissonant sonority can be heard on recordings from his avant-garde period, such as those with the band Circle.

Another signature Corea sound is his extensive use of “slash” (or compound) chords, shown here in Ex. 5. F/F# is a diminished sound, E/Eb is a Spanishtinged. Gb/C is half- diminished. Db/A is, once again, a maj7#5 chord, and Gb/Ab is a dominant seventh with a suspended fourth. Corea often played such slash chords with his group Return To Forever.