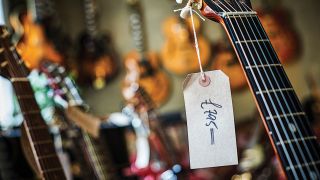 The high street guitar shop is a theatre of dreams. Who hasn’t gazed longingly into the window of a guitar store and wondered what bits of heaven and earth they could move to get the guitar that lies behind the glass?

Of course, buying direct from the internet is a big part of the new-guitar equation these days, but some things never change…

“If you are spending a decent sum of money on a guitar, take a trusted friend with you,” recommends Guitarist contributor and self-avowed gear addict Stuart Ryan.

“At some point in proceedings, you may find yourself beginning to doubt your own ears, for better or worse, so it pays to have a second set of ears there to give you that uncut, personal opinion that a salesperson may not offer. Better still, if your friend is a decent player then you’ll be able hand them the guitar so you can stand back and hear what the instrument is capable of, up close, from a distance or even the other side of the room.”

A trade-in is still a handy way of bringing a dream guitar within reach, provided you’re realistic, says Mark Smith of World Guitars in Stonehouse, Gloucestershire.

“A trade-in is not usually going to bring in as much as selling your old guitar privately, but it is convenient, allowing you to get a sizeable discount on a new guitar with a minimum of hassle,” he says.

“The most sought-after guitars will obviously command a better trade-in price - but speculative pricing by private sellers on the internet sometimes gives people an inflated idea of what their own trade-ins are worth. As a general rule, you should expect the retailer to tell you not only what they’re prepared to give you for your guitar, but what they will be selling it on for, so you can decide whether it’s an acceptable trade.”

What is a fair trade? Well, the dealer is buying your guitar to sell on, so clearly they’ll want to make some money on it. So, if they think your guitar is worth £1,000, that’s what they’ll need to sell it for. They need to make their margin - say 25 per cent - and then there’s VAT to add at 20 per cent. Subtract those and you arrive at a typical trade-in price.

Perks you can push for

What can you reasonably ask a retailer to ‘throw in’ by way of perks for sweetening a deal these days?

Most dealers will offer to match a lower price you’ve found elsewhere or “accessories to the value of the price difference”, as Chris Fairly of Halifax guitar store GuitarZone suggests. With online selling paring down prices (and dealers’ margins) across the board, using a lower price found elsewhere - if a legitimate one can be found - may be your best leverage to obtain a few small perks.

Trawling through noisy guitar shops is fatiguing. After a few hours of trying out guitars your ears will get tired and, as closing time looms, you may feel the urge to buy something… anything… just to have something to show for your efforts. Do that and you’ll likely make an over-thought or half-hearted decision that will haunt you later.

Take regular breaks for coffee or a stroll to refresh your ears and restore your judgement. Trust your gut and if you don’t come across a guitar that slaps an instant grin on your face when you play it, save your money for another day.