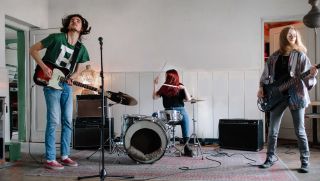 Rehearsing can be an exhilarating, and extremely rewarding, experience; a melting pot of ideas and suggestions or the perfect run through in preparation for a performance. It can also be littered with problems and issues.

No matter whether you, the band you play with or the band/artist you're playing for are rehearsing covers, original material or writing new material at the rehearsal, you will be paying for the rehearsal either financially or in personal time and commitment.

It makes sense to approach rehearsing in a semi-structured way, so that time is maximised, value for money is received and the desired results are achieved.

Ineffective rehearsals and lack of preparation invariably lead to band disagreements yet with some careful planning and effective communication, such problems can be avoided.

Don't leave things to chance and by keeping everyone involved and in the loop, everyone should be on the same page, proactive and positive when they walk into the rehearsal room.

Rehearsals allow minor performance issues to be ironed out, ideas to be expressed and solutions to ongoing musical problems to be addressed. In a gigging situation, many musical errors pass by at rapid speed so rehearsals allow you to tighten everything up to produce an even better and more polished performance.

Communicate effectively when it comes to planning your rehearsal, take into account everyone's prior commitments and availability so if the band doesn't already, ask everyone to use an online calendar so each individual's availability can be clearly seen and taken into consideration.

If parking is at a premium, suggest that those driving give themselves enough time to find appropriate parking and setting-up time. Also, let everyone know what time the room has to be vacated so that packing away time at the end is feasible. Don't incur extra costs as a result of leaving late!

2. Make a plan of action

What is the reason for calling the rehearsal in the first place? If it is to write new material from scratch and to develop songwriting ideas, it can be difficult to create a structure as such but if it is to rehearse existing material or to learn covers and build a songlist or to run through an entire gig set before a performance, be organised as to what you want to achieve and use the time to accomplish.

Send out a list of what songs will be rehearsed, the key they will be performed in and any relevant points of note for individual instruments, such as solos or extended sections.

3. Get your songs in order beforehand

Regardless of whether songs are originals or covers, everyone should have a copy/file of each song that is to be rehearsed or provided with an online link where they can download or listen to the song prior to the rehearsal.

One vital point here is that everyone learns the same version of the song – check that there aren't multiple album/single/remix/live versions which can cause confusion.

Stress that the songs need to be learnt beforehand so turning up to rehearsal with no idea of the song or its format isn't acceptable. Learning the songs should be done at home, not at the rehearsal on the day so use the rehearsal to fine-tune any minor errors or to make adjustments and work out vocals, harmonies, etc. But, in essence, the 'meat and potatoes' of each song should be prepped and in place before arrival.

That means bringing everything you need with you. Don't assume that the studio or rehearsal premises will have any spares. Some studios will charge you to hire equipment and accessories so don't make rehearsals more costly than they need to be.

If the studio is new to you/your band, contact them in advance to confirm exactly what equipment is included in your booking, what amplification they provide, what state is the drum kit in, does the drummer need to bring cymbals/snare/high-hat clutch, will there be enough mics/stands/cables to cover all the vocalists within the band?

If you're not sure that the equipment provided will suit your tastes or the sound of the band, bring your own but then there is the transportation to the studio and carrying the gear in and back out again to consider.

Whether the rehearsal is for original songwriting of new material or covers, it can prove beneficial to record the rehearsal either on your mobile phone or a separate MP3 recorder or another device.

It may give you insights as to whether you are making any mistakes that might be passing you by due to the hectic nature of a rehearsal or it may allow you to hear how certain vocals may be working well or clashing.

Hearing how the other musicians are playing or singing may become more apparent if you can listen back to the rehearsal after the event. With original songwriting, having a recording to listen back to can reveal great ideas that may have been overlooked at the time.

6. Be realistic about time

Consider how much time you have and plan what you can effectively accomplish in that time. If the rehearsal is in preparation for an imminent live performance, you may need to run through the entire set so consider have you given yourself enough time to do that?

Also, have you allowed enough time for setting up, breaking down, food/drink/rest/toilet breaks? If you are rehearsing to add songs to your repertoire, be sensible and don't assume that one run-through of each song will be enough and good enough for that song to be in your set.

You may need to fine-tune it, maybe put your band's own slant on it or incorporate it into a medley of songs. Is the song going to be going into the set immediately or will it be a song to call upon should you need it at a later date?

7. Consider having a leader

Some bands are democratic, some are a dictatorship so establish who is in charge of running the rehearsal, if that's applicable, and consider passing that role around the band if you rehearse often so the workload is spread around.

Keep an eye on the clock and prioritise what needs the most work and effort so you get as much accomplished during the rehearsal as possible.

Consider making the person calling the rehearsal the point of contact and responsible for making the booking with the studio, all communication within the band and with the studio and sorting out the payment for the studio (although costs may be required from each member) unless the band rehearses regularly, in which case let each band member pay for one rehearsal in rotation.

Allocate break time in advance, especially when working out how much time you need before making the booking. If you're rehearsing for 3-4 hours, you won't need a long break to eat and refresh but for anything longer, allocate 30-45 minutes beforehand which might be broken up over the length of the rehearsal or all in one hit halfway through.

Does the studio have a snack bar or vending machines or are there places to acquire food and drinks nearby? Alternatively, suggest that everyone brings their own refreshments in advance.

It might also be worth suggesting eating well before the rehearsal in case there is nothing available, although this might leave some feeling sluggish and tired but rehearsing hungry/thirsty and low on energy is counter-productive for most people.

Keeping the mind focused and concentrated during a rehearsal can be difficult so drink plenty of water, which has the double benefit of keeping the vocal cords moist and oiled.

9. Make some time for reflection

Mirrored walls can be helpful. Forget any voyeuristic connotations! If your performance involves any sort of choreography or the band's look and general performance need consideration, hiring a rehearsal room with a mirrored wall or some sort of mirrors could prove beneficial.

If the band is fairly large, it may also make visual communication with other band members easier without having to shout over the band.

10. Keep it down… seriously

Where possible, keep the volume levels down and you will find you feel less tired during and after the rehearsal. Pumping everything up will just drain you as your ears become fatigued by the volume levels.

IEMS (in ear monitor systems) can make things easier and may allow you to do away with speaker cabinets, PA speakers and loud drum kits if you choose to go down the electronic kit route.

Don't be surprised if volume levels have drastically increased by the end of the rehearsal compared to what they were at the start.