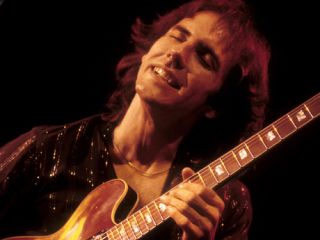 ABOVE: One of MJ's guitarists Larry Carlton in 1979 © Clayton Call / Retna Ltd./Retna Ltd./Corbis

Song: She's Out Of My Life

Context: As the chord over "to think for 'three' years that she was here".

This chord is often found, as in the Jackson number, as a deliberately tense chord between A and Ab m7 (or the equivalent in other keys). Play these chords and notice how sweet the Ab m7 sounds after the uneasy B/A. This is a popular chord in ballads and film music - can you hear where it comes in the ET theme…