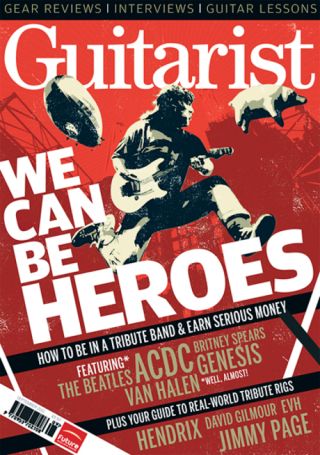 Only in issue 350 of Guitarist…

We Can Be Heroes

Guitarist delves into the murky world of the tribute act, and find out what it's like to get paid to not only emulate your heroes, but to play huge venues doing it!

PLUS! We give you the lowdown on four rigs that you can assemble today if you want to emulate four of the greatest guitar heroes of them all - Jimmy Hendrix, David Gilmour, Jimmy Page and Eddie Van Halen.

The ZZ Top legend sits down to talk about the band's long-awaited new album, and explains why gauge 0.008 strings just aren't thin enough…

The US guitar god talks about guitar philosophy and having a new record under his belt.

Guitarists Mikael Åkerfeldt and Fredrik Åkesson discuss the process behind their stylistic left-turn on new album Heritage, and tell us what's wrong with metal guitar players these days…

Boogie's most popular amp of the last two decades gets the lunchbox amp treatment - yes it's cute, but stand back, it packs a punch…

A name and shape that barely made it off the drawing board in the 1960s, brought back from the dead. But is it any good this time?

Guitarist issue 350, is available now from all good UK newsagents. Non-UK readers can purchase a copy from www.myfavouritemagazines.co.uk, or UK readers can subscribe and receive a free gift!