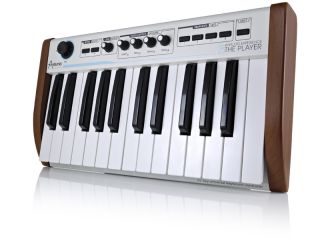 It's time for another weekly recap on what's been rocking our world of late. Let's start with some good old trumpet-blowing. First off, the number of fans of our Facebook page sailed past the 4000 mark. We also kicked off The CM Factor, a new weekly event that gives you the chance to get your music on the cm DVD - check it out and take part! Oh, and we pumped out a couple more titles for you: Computer Music 157, Autumn issue and Ableton Live: The Ultimate Guide. Anyway, enough with the backslapping…

Ableton finally launched The Bridge but also took us by surprise with Amp for Live. It's a guitar amp sim with modelling technology from Swedish DSP boffins Softube. The official demo video is notable for its distinct lack of blues-rock gurning and heavy metal heroics - what a letdown!

Compact keyboards seem to be all the rage, and this week we've taken delivery of some of the latest efforts. There's Arturia's The Player, which is impressively robust (and rather heavy); Korg's microKEY, being a lightweight portable device with two USB ports for plugging in more gear; and Akai's novel iPhone-ready SynthStation 25. ESI also released the Keycontrol 25 XT, but we haven't got one yet.

Elsewhere, digital DJs could drool over Faderfox's titanic 4midiloop. Steinberg released WaveLab 7, finally making this splendid audio editor Mac-compatible too. And Novation released the UltraNova, an impressively spec'ed synth - disappointingly, however, it's one of those despicable hardware contraptions that only the likes of our sister magazine Future Music could appreciate! We're holding out for a plug-in equivalent, a la V-Station and Bass Station. How about it, Novation?

Finally, check out this video of the amazin' Photosounder, demonstrating a new technique that the developer calls "melody flattening". This is some far out stuff, to be sure!