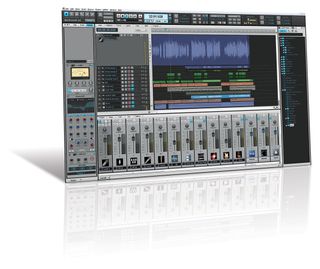 Sonar is regularly updated with new plug-ins, features and optimisations, but the next version, dubbed Sonar X1, looks set to change the powerful American DAW more radically then ever before.

The new features include a completely rebuilt front end with more information packed into a smaller area, 'smart tools' offering consistent operation across all edit windows, new mixing channel-strip processors modelled on classic analogue hardware, and asset management that organises everything from patches to video in a single window. This video from Cakewalk show off the new features

Although Sonar is hugely popular in the US, it doesn't have quite the same level of acceptance in Europe, possibly because of its reputation for having a rather complex, fiddly interface. From what we've seen of this new version (and we have actually seen it in action), the fundamental changes Cakewalk have made to the GUI should make that criticism a thing of the past.

Sonar X1 will cost $399 for the full Producer version with the Studio and Essential versions retailing at $199 and $99 each - UK prices have yet to be announced, and the launch date is December 8th.