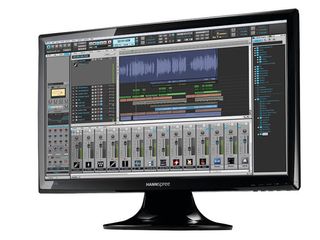 Cakewalk has announced Sonar X1, the new version of its popular DAW. However, rather than being a straightforward update, this is being billed as 'Sonar reimagined'. In fact, when Cakewalk recently visited MusicRadar to give us a hush-hush preview, it even went so far as to say that it had created 'DAW 2.0'.

Whether Sonar X1 really represents such a generational leap forward is sure to be hotly debated, but it is markedly different to the version (8.5) that it supersedes. Let's find out how.

At the heart of Sonar's new look and feel is Skylight, which Cakewalk is calling "a next-generation workspace". This has four main components.

The Inspector displays track and clip information, while the Browser puts all of your content in one place. We're talking instruments, effects, samples, projects, templates, video files… everything.

The Control Bar, meanwhile, contains transport controls and other vital features, while the MultiDock enables you to dock and access all of Sonar's views in one place. This is a big point to make: Sonar X1 addresses the criticism that Cakewalk's DAWs can become cluttered by making all of its views dockable, expandable, collapsible, configurable and moveable.

Fortunately, Screensets enable to you to recall all window positions, sizes and states - these can be accessed from the Control Bar or your QWERTY keyboard. And speaking of keys, Sonar X1 'reimagines' the software's keyboard shortcuts by grouping similar functions around one Alpha Key.

To give you an example, L turns loopjng on or off, Shift + L sets the loop points to selection, and Ctrl + L enables Groove Clip looping in the Track view. Sonar veterans can be assured that their old shortcuts can still be used, but Cakewalk believes that its new system is better and hopes that even old-hands will switch to it.

Of course, there are still plenty of times when you'll need to use your mouse, which is why Cakewalk has also introduced Smart Tools. The big news here is that the mouse pointer automatically changes to the most appropriate tool based on context (saving you the bother of switching), though there's also a pop-up, floating tool window so that you can make manual selections. Sonar's tools work across all of the software's editing views.

Other workflow enhancements include enhanced drag 'n' drop functionality - you can now move the vast majority of things in Sonar from one place to another - and FX Chains. These enable you to create arrangements of multiple effects and then tweak them as if there were a single effect.

NEXT: ProChannel and pricing

As before, Sonar comes in Studio and Producer versions (plus a new Essential version that replaces Cakewalk's entry-level Home Studio products) and the biggest new Producer-exclusive feature is the ProChannel. This appears as standard on every track and offers vintage-style compression and EQ.

There are actually two types of compression - the PC76 U-Type channel compressor and the PC4K S-Type bus compressor - while the EQ is 6-band (2 shelf/bells and 4 bell/notches). It also offers two fully parametric filters, Pure, Vintage and Modern modes and an additional 'Gloss' mode to add instant sparkle.

When and how much?

That's the Sonar X1 feature highlights covered, but of course, smaller tweaks have also been made throughout the application. We'll cover these in our upcoming review - the software is scheduled to be released on 8 December, and you can rest assured that if you buy Sonar 8.5 Studio or Producer from this day forward, you'll get a free update to its X1 counterpart. In addition, anyone who buys Sonar Home Studio XL will be entitled to a free copy of Sonar X1 Essential, and Sonar Home Studio purchasers can get X1 Essential for $49.

US prices have already been confirmed as $399 for Sonar X1 Producer, $199 for Studio and $99 for Essential. UK pricing is still TBC.