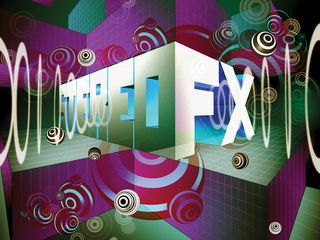 Stereo processors: coming at you from all angles.

Although surround sound has made its mark in the music technology industry, most listeners still partake of their music in two-channel stereo. Surround sound may be a vital part of the cinematic experience, but most music is sold as stereo MP3s or CDs. Music is most commonly heard behind the wheel of a car or via tiny earbuds attached to an iPod or phone.

Obviously, the stereo format is alive and kicking - and so should it be. One could make a compelling argument that all music is heard in stereo, since we have only two ears. Directional hearing is still a result of a binaural process.

Surprisingly, stereo recordings didn't really catch on at first. In the pop music heyday of the 1960s, many engineers considered stereo a novelty. In fact, many of the most famous stereo albums of all time were mixed as such merely as an afterthought, with the job often being relegated to studio interns. The senior engineers (and the lion's share of the studio time) were reserved for the monaural mixes.

All that changed in the 70s. 'Hi-fi' was a buzzword of the day, and audiophiles spent small fortunes on their systems. With the exception of a short dalliance with quadraphonic recordings, the record industry concentrated its efforts on stereo productions.

With the advent of 24-track tape decks, more tracks could be used, meaning more stereo recordings at the source and more room for double-, triple- and otherwise multitracking instruments, resulting in thick stereo panoramas. Mixing engineers made use of autopanners that could bounce the sound around the stereo soundfield, and other effects designed specifically for stereo use.

"Surround sound may be a vital part of the cinematic experience, but most music is sold as stereo MP3s or CDs."

Little has changed since then - effects dedicated to enriching the stereo experience abound, even if they lack some of the wow factor they once claimed. Still, there are those that widen the perceived stereo field, and others that simulate three-dimensional vistas using only two channels. As you'll see, there are those that are intended for subtle corrective use and others that are little more than gimmickry.

The lion's share of available stereo effects are those that in some way move or adjust the signal's position in the stereo soundfield. Some are as simple as individual left/right controls for a stereo signal. Others are based on autopanners, effects that make use of an internal LFO that modulates the pan position of the effected track. Still others take this idea quite a bit further, providing custom waveforms or other, more complicated means to position the sound.

Another class of stereo processors attempt to adjust the perceived depth of a stereo track, providing various ways to tweak the stereo width. Some of these so-called enhancers work their magic by employing filters and even delays to create some distinction between the left and right channels. Some are quite convincing, while others just tend to screw up your signal. Tread carefully here; these stereo enhancement effects are meant to be used transparently, and it can be easy to overdo it.

There is another sort of stereo processor that's worth singling out: those that simulate a three-dimensional sonic image using only two channels. These unusual effects have been around for a while. Michael Jackson's Dangerous album made use of one such process, QSound, from QSound Labs.

This same process was very popular with game developers and could be heard in a variety of game titles, particularly those from Capcom. Similar technology was produced by Roland in the form of its RSS-10 Sound Space Processor.

Though a number of major label releases were mixed using these devices, they never really caught on in the studio arena and were eventually all but edged out by the rise of multi-channel surround technologies. Nevertheless, similar tools are still available in various guises, including a number of software effects intended for mastering.

Another stereo process that's well worth getting to grips with is mid-side recording. Mid-side plug-ins don't actually do anything on their own, but depend on a recording that has been made using the technique of the same name.

Essentially, this is a stereo recording technique employing two microphones, one in figure-8 mode and the other in omni or cardioid mode. The former is known as the 'side' mic, and the latter is called the 'mid' mic.

The side mic is positioned so its null side is facing the source, while the mid mic is aimed right at the source and is physically as close to the side mic as can be. This is all done in order to provide a flexible multi-channel recording that can be adjusted at mixdown. Mid-side techniques allow you to adjust the relative volumes of the channels, creating a wider or narrower stereo spread.

Traditionally, mid-side techniques require decoding into a trio of channels. You can set this up in your mixer, but it's easier to use a dedicated processor to do the work. Many processors support mid-side recording these days, though not as many as we'd like to see.

In use, stereo processing tools are very much an all-or-nothing proposition. They are intended either for subtle enhancement or in-your-face novelty. In either case, it's often all too tempting to go overboard. Enhancers should, as we've cautioned, be used sparingly, while the more gimmicky processes should be used only occasionally. A track that is autopanned from hard left to hard right throughout is going to get very tiring, very quickly.

Having said that, such effects can add interest to a track and are certainly worth exploring - just be aware that if you do go too far with your stereophonic shenanigans, your exasperated mastering engineer may have to use his own stereo processing skills to bring your track back down to earth!

As mentioned above, there are some processors designed to give the illusion of a three-dimensional sonic vista using only stereo channels. Panorama is such a plug-in - using specialised DSP technology, it can give the illusion that a specific sound is placed to the left, right, up, down, front, or back, near or far from the listener. Pretty convincing, and great fun to use.

It doesn't get much simpler than Stereo Tool, a plug-in that's designed to give you visual feedback of your stereo image. You can control the left and right level individually, invert the phase for each channel, and tweak global stereo pan and width. An essential tool for the mastering engineer, but also quite useful for any stereo tracks at mixdown (think drum overheads or stems).

Designed as a means by which to accustom yourself to the intricacies of mid-side mic techniques, bx_solo allows you to solo each of the various elements of a mid-side recording. Left and right, mono sum and stereo difference channels are all available, and they're phase-corrected, too. A stepped mid-side stereo width control is included as well.

As you'd expect from Cableguys, PanCake is a wacky, customisable, over-the-top stereo panner - it's autopanning taken to loony extremes. Instead of the sine or triangle wave LFO seen on traditional autopanners, PanCake lets you create your own waveforms. Up to ten can be stored, and you can sync the lot of them to your DAW's tempo.