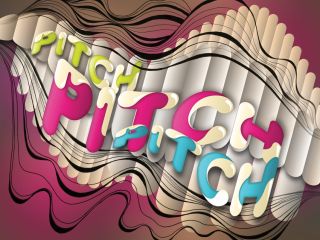 Get pitch or die tryin'.

Though the parameters and the technology that drives them may have changed and evolved over time, many of the effects we know and love have been around for decades. Reverb, delay and distortion have all been in use since the early days of the recording studio - but only the most cutting-edge technological wizardry could have produced the modern musical miracle that is pitch correction.

The idea is pretty simple, even if the execution is not. The frequencies of incoming signals are analysed and re-pitched to fit a predetermined musical scale. Analogue synthesists have been doing stuff like this for yonks, using gizmos called quantisers, but these only work with voltages, not full-on musical waveforms. It takes some serious science to pull it off with, say, a vocal passage, and even more to do it in real time.

And yet software such as Antares Auto-Tune can do exactly that, examining and nudging monophonic audio signals lock-step into tune. When used tastefully, it can save time, and possibly your track too. Why dismiss a killer performance if only a note or two wavers? More to the point, why waste time on another take, particularly if you're working in a pro studio, where time is money?

If that sounds a little mercenary, then you can see why Auto-Tune has become the subject of much debate and controversy. When is the bottom line more important than artistic endeavour?

Controversy aside, Auto-Tune and pitch correction are here to stay. The world is rife with oh-so-perfectly pitched performances, and often by musicians who need no such help. And of course, certain producers have discovered and marketed the weird, almost vocoder-like effect produced when the technology is pushed beyond the limits of its intended use.

First popping up on Cher's hit single Believe (though to this day, the producers are cagey about exactly what was used to achieve the effect in this case), this odd effect has become pervasive, used to the point of absurdity. It's even been applied, with tongue planted firmly in cheek, to news reports and political speeches.

In all seriousness, pitch-correction tools can be used for more than subtle correction or gimmicky vocal phrasing. They can provide a wealth of ideas and inspiration if, natch, you know how to use them.

Though the mention of pitch-based effects immediately brings to mind Auto-Tune and its descendants, there are in fact a number of pitchshifting effects that have nothing at all to do with correcting wayward tuning. High-dollar hardware manufacturer Eventide made its bank back in the mid-1970s when it introduced the H-910 Harmonizer. This mysterious black box played a major role in many famous recordings, finding favour with producer Tony Visconti, who used it to great effect on David Bowie's Low album. He famously cited its ability to "fuck with the fabric of time" when describing its effect to Bowie and Eno.

What it actually did was to digitally sample the incoming audio and produce a pitchshifted copy (user-defined, of course) that could be mixed with the original or played on its own. A built-in delay provided thickening or wacky, cascaded pitch variations. It was also quite useful for pitchshifted delays.

The H910 and its follow-ups were embraced by the likes of Jimmy Page, Eddie Van Halen and Frank Zappa. It has now been resurrected in software form by Eventide themselves (alas, only for Pro Tools), and was heavily influential on the design of Audio Damage's delightfully dark Discord. Loads of other hardware and software gubbins have cribbed the idea, too, to the point of it becoming something rather run-of-the-mill.

These days it's not at all uncommon to find vocal doublers, pitchshifters or harmonisers included in any effects bundle you might pick up. The template is now pretty common: one or more pitchshifted copies are added to the original signal, with each copy being independently adjustable. This can simulate vocal harmonies, double-tracking or even full choirs.

What these pitchshifters generally don't do is fix the incoming pitch. If it sucks going in, the harmonised versions of the signal will be equally out of tune - and that, obviously, is where pitch correction comes into play.

Initially designed by Exxon engineer Andy Hildebrand, Auto-Tune first hit the market in 1997. Based on phase-vocoding technology, it gave producers and performers a way to correct pitch inaccuracies in monophonic vocal or instrumental performances. As its popularity grew (even if many musicians weren't admitting to having used it), hardware versions and multiplatform, multi-format incarnations were issued.

The most recent includes all manner of nifty functions, including throat modelling, graphical pitch editing and humanising. And of course, you can still force it into the so-called Cher/T-Pain effect, if you must, by cranking up the Speed dial.

Antares has an exclusive license to the technology used in Auto-Tune, but that doesn't mean some other developers haven't been able to create their own take on the idea. One of the most effective is found in Celemony's Melodyne, an application that can examine a signal, determine the pitch and timing of each syllable and splay them out across a timeline. Users can snap the bits to the nearest semitones or move them about the note range willy-nilly. Timing can be adjusted as easily and, best of all, it even works on polyphonic signals. This goes a bit further than mere pitch correction and becomes a powerful arrangement tool. It's a simple matter to re-harmonise your tracks, creating new and interesting variations.

It might not be the most famous pitch-correction tool, but it may very well be the most sophisticated. Melodyne can examine your recordings, extract the timing and the pitch and make them available to you on a timeline-style grid. You can adjust the timing and pitch of each syllable, even creating complex harmonies from monotone lines. Amazing.

The name has become synonymous with pitch correction and outre pitchshifting: Auto-Tune, when used tastefully, is a miraculous time-saver for the desktop producer, and when used in a more over-the-top fashion, it can be a hit-maker.

If you're on a PC and on a budget, you might want to avail yourself of the free GSnap VST plug-in from GVST. It can handle all of the basics, from subtle correction to more outlandish Auto-Tune-like warbles. You can tell it which notes to ignore and which ones to fix, and thanks to the built-in gate, it'll even ignore any background noise that crops up during the quiet bits.

Find out more about GVST GSnap

This clever little fellow is bundled with the Studio and Producer Editions of Sonar. It provides pitch and time correction along with full malleability of your track, and will be very familiar to users of Roland's VariOS system. It's easy to use and great fun, too.