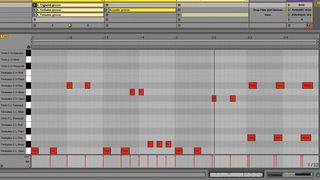 Latin percussion doesn't get more simple than the claves... or more technically involved than the timbales.

A pair of thick, short wooden batons, one cupped in the hand to maximise resonance and struck by the other, the claves are the most primal of instruments in any Latin band, tapping out a sort of complex click track that guides the whole ensemble. In non-Latin music, they're ideal for creating a feel or as a spot effect.

While Latin percussion doesn't get more simple than the claves, it doesn't get much more technically involved than the timbales - a pair (or sometimes more) of shallow, metal-shelled single-headed drums, one slightly smaller than the other. They're mostly played with sticks, but can also be played with palms and fingers, for dynamic and tonal variation. For electronic and dance music, these uniquely characterful drums are most effectively employed for fills and as a rhythmic counterpoint to the drum kit.

Here, we'll show you how to program basic clave and timbale parts for use in your pop, rock and electronic productions. We're using Ableton's Latin Percussion Live Pack, but any general percussion sample set should feature similar sounds. Most of these patterns were recorded live and left unquantised, as any good percussion track should be.

Step 1: The primary role of the claves in Afro-Cuban music is playing the foundation rhythm of the same name.The two most ubiquitous clave rhythms are called son clave and rumba clave, and although they sound pretty similar, each has its own distinct feel. Here's the son clave.

Step 2: Each of the two clave rhythms is divided into two halves: the three-side (three notes) and the two-side (two notes), and either half can come first. Here's the rumba clave, now in its two-then-three formation. The difference this makes to the rhythmic phrasing within the bar is profound.

Step 3: You don't have to stick to traditional clave rhythms - any rhythmic riff is fair game. We'd advise keeping things simple, though, as the cutting sound can easily make it irritating if the notes get too dense. One of the most effective uses of clave sounds can be for occasional reverb-heavy emphasis of the backbeat.

Step 4: Programming authentic timbale parts isn't for the faint-hearted, but let's look at the fundamentals. First, the good ol' timbale fill. The brash, ringing tone makes these drums ideal for marking the end of a phrase. Combine open strokes with rimshots for realistic variation, as we've done here.

Step 5: In simple terms, there are two main types of timbale groove: the cascara and the bell pattern. Cascara is Spanish for 'shell', and the technique involves playing a clave-style pattern on the shell of one drum with or without incidental notes on the head of the other. The cascara is often used in verses and quieter song sections.

Step 6: The bell pattern, as the name implies, brings a mambo bell or woodblock mounted above the timbales into play. In non-Latin music, you can just use articulations - open, rimshot, mute, etc - to build rolling rhythms that complement your drum kit parts. Again, don't go overboard with the note density.