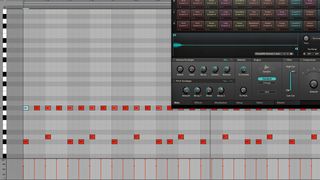 The fact that contemporary Western music is so heavily backbeat-orientated gives the adventurous drum programmer endless scope for playing with their listeners' rhythmic expectations by shifting beats from their expected positions in such a way as to go beyond conventional syncopation.

In its simplest form, 'beat displacement' can constitute nothing more than the repositioning of a single snare hit, or simply the adjustment of accented emphasis in a hi-hat part. But the idea can also be used to more complex effect by offsetting the whole interplay between kick and snare, throwing the timing base of a track into what appears to be disarray, only to have it return triumphantly to the regular beat at the moment of your choosing.

Having said all that, unless jazz fusion is your genre, overt beat displacement is best used as punctuation rather than a fundamental starting point - knocking the kick and snare off by a 16th-note for the entirety of your latest DnB banger might sound cool in the studio, but it's guaranteed to clear the dancefloor in seconds.

So when you want to confound, confuse and rhythmically challenge your audience, dropping the odd bit of beat displacement in at strategic points could be your tactic. Here, we'll show you how to radically alter a straightforward groove by moving kicks, snares and hi-hats around.

Step 1: Here's a basic beat triggering Battery 4 in Ableton Live. The eighth-note hi-hats alternate between two velocities, emphasising the main beats. By shifting the hi-hat pattern an eighth-note either way (and wrapping the overhanging hit back around), a funkier off-beat feel emerges. This is perhaps the simplest and most obvious of all displacements.

Step 2: While the hi-hat example was more about shifting emphasis than moving the beat, displacing the kick drum is far more transformative, and something you probably do already. Here's the kick pushed back by a 16th-note in the last bar of the four. Satisfyingly wonky but not hugely unusual, since kick drums tend to move around within the groove anyway…

Step 3: Beat displacement really starts to become interesting when the snare drum gets involved, since we're so accustomed to hearing it hammering out beats 2 and 4. By pulling the first hit of every other bar in our four-bar phrase forward in time by a 16th-note, a sense of driving momentum is introduced.

Step 4: We can go much further than that, though. Here's each snare hit offset from its 'default' position by an eighth-note in bar 2 - first earlier, then later - and 16th-notes in bar 4. It's amazing how much of a difference can be made to the push and pull of a groove with such simple positional changes.

Step 5: Now let's try a couple of 'full groove' displacements. In the second and fourth bars of this four-bar phrase, we've pulled the kick and snare forwards in time by a quarter-note and wrapped the kick drum on beat 1 round to beat 4, effectively swapping the kicks and snares and turning the whole pattern on its head.

Step 6: Here's the same concept again but this time moving the kick and snare in bars 2 and 4 so that they land an eighth-note later, then deleting one of the kick hits to thin the part out a bit. The result sounds like a weird reversal of the entire beat, even though we've made the most minor of edits.