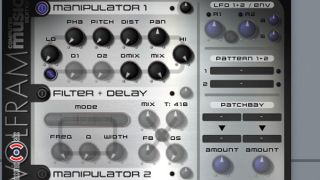 If you're a regular MusicRadar reader, you should already have a fairly decent knowledge of how to replicate a human drummer or percussionist on the piano roll - but what about those moments that call for a ready-made drum loop?Your chosen genre may demand a level of percussive density and thickness that can be difficult to achieve using only one-shot hits; or perhaps you need a source that can be chopped up and re-sequenced for a shot of rhythmic inspiration.

Enter the humble drum loop: a bar or more of a multilayered drum groove that cycles perfectly over and over, creating the illusion of one continuous, seamless performance. Loop usage is often labelled 'cheating', but we'd argue that, while using an entire loop from a sample pack isn't the most original
endeavour, it's very important - essential, in fact - to possess an arsenal of self-built loops that have been designed to neatly slot into your own tracks.

Here, then, we're going to use free plugins to explore the various ways in which you can craft bespoke cyclical creations from a ready-made loop.

Step 1: First, isolate a short shuffle or hi-hat segment within a groove. We're starting with a house loop. You don't have to stick to 'regular' loop lengths: our section is a beat and a half long, which creates interesting polyrhythms when looped over a four-to-the-floor kick.

Step 2: Transient designers are powerful tools for loop-shaping. We're using Audiority's TS-1 CM to clamp down on the sustain and force up the attack, tightening the overall loop and removing its ambience. As a handy side effect, this plugin also adds characterful tape-style saturation.

Step 4: Now you can go to town with creative transformation. Multieffects such as Subsonic Labs' Wolfram CM put several processing possibilities within the same interface. We're using the plugin's Pitch and Phase knobs to transpose and phase the loop. Again, mix the effects in parallel for subtlety.

Loop with parallel pitch and phase

Step 5: Next, we're placing iZotope's free Vinyl plugin at the start of the plugin chain, with its Warp Depth set to around 50%. This emulates the pitch warbling of a vinyl record, warping the signal's pitch slightly and adding subtle rhythmic inconsistency.

Loop with iZotope Vinyl at start of chain

Step 6: Automate a few plugin parameters to apply custom sweeps and changes on a micro level, or use level automation to create rhythmic ducking, gating and movement. Now render the loop at each stage of processing to archive your creations for future use. Rinse and repeat to build up a bespoke loop library.