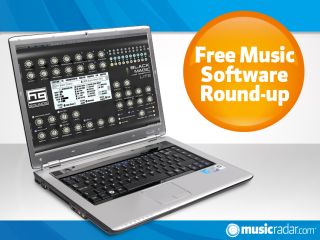 Will Black Magic Lite have you under its spell?

After a two-week break, we return with the usual selection of effect and instrument plug-ins, which range from the conventional to the decidedly quirky.

Amid the amp sim and distortion pedal emulations, you'll find a synth that produces chewing sounds, a loop generator and a simple pitch-changing plug-in, so it's probably reasonable to suggest that there's something for everyone.

A word of warning, though: we're in PC-only territory again this week. Sorry - we'll bring you more Mac stuff as and when it arrives.

Oh, and if you're a developer who's releasing a free piece of music software, be sure to let us know about it.

Physical modelling can be used to create a wide range of sounds; in the case of Stoq, it's been employed to emulate "continuous shaker and rattle timbres". This means you get tambourine, brushed snare and jingle bell presets, plus non-instrumental patches such as footsteps and chewing.

The Lower Rhythm A-110 Amplifier

Looking to give your sounds a little more grit? This tube amp simulator could be the answer. Freshly updated to v1.5, it comes with a 3-band EQ, compressor, low-pass filter and secondary tube channel with four amp models. It was principally designed for use on drums, but its creator also recommends it for pianos, synths and guitars.

Featured in week 7 of our free music software round-up, Nick Crow returns with another tube guitar amp. Like the 7170 model, this features a pretty standard set of controls, but has a much nicer GUI. For best results, the developer recommends that you use 8505 lead in conjunction with a guitar cab emulator.

This is the cutdown version of the full Black Magic, but contains many of this loop generating plug-in's main features. It can randomize and save out looped WAV files and features 10 samplers, 128 preset samples, an FX section, a 10-part 32-step sequencer, a mixer, a 1-bar recorder and more.

Having previously updated its Fuzz-Stone Distortion pedals, Auraplug has now turned its attention to the Red Skull model. Version 2.0 of this high-gain pedal is designed to deliver chunky metal tones and comes with a redesigned interface, improved voice management, bug/compatibility fixes and shorter loading times.

A curious little effect, this. As its name suggests, it enables you to adjust the pitch of your audio - by plus or minus 50%. This is done with a single slider, and there are also faders to adjust the gain and apply a phasing effect. One says that its next effect will feature the same pitch scaling algorithm but also add timestretching functionality.