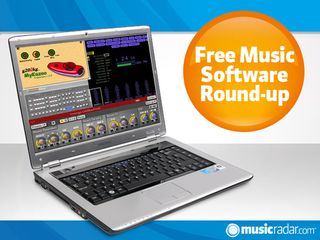 Three updates this week, including one for Audacity, the much-loved open-source audio editor. As for the new stuff, this takes inspiration from the legendary SID chip and humble kazoo.

Mobius is inspired by the hardware loopers of the past and enables you to run eight synchronised stereo loopers that offer QWERTY and MIDI keyboard control. The 2.0 release brings a redesigned synchronisation engine, AU host sync, support for sample rates other than 44100 and more.

A 'classic' stereo reverb plug-in that promises a very clear spatial image that blends well within your mix. There's an improved algorithm in this version and, with a bit of tweaking, we're told that you can get everything from plate to hall reverbs. The plug-in is best applied to non-percussive and soft-attack sounds such as vocals, pianos and pads, apparently.

An update for the open-source audio editor that surely everyone's used at one time or another. Significantly, many of the effects have been improved, Vocal Remover comes included, there's a new device toolbar and automatic crash recovery.

With its Commodore 64-style looks, it shouldn't surprise you to learn that Bleep is a chiptune synth that's inspired by (but not a straight emulation of) the SID chip that was contained in said computer. There are three oscillators, a multimode LFO, a modulator envelope generator, a pseudo arpeggiator and an overall multimode filter.

The kazoo isn't exactly a difficult thing to play in real-life, but if you want a software version, here it is. It's actually an effect rather than an instrument: apply it to a vocal track and then adjust its sound using the Sensitivity and Color controls.